It’s not that anyone needs a lot of convincing to visit this part of the world. From the most dramatic snow capped rugged mountain ranges, stunning glaciers, the bluest of lakes, lush green forests and beautiful blue skies, the Canadian Rocky Mountains are a place that every nature-loving, adventure-seeking and wildlife-enthusiastic traveller should have on top of one’s travel list.

Buf if you still have not made up your mind, the images below should help.

Spectacular ice-blue waters and surrounded by towering mountains, Maligne Lake, the second largest glacier-fed lake in the world, is located at the edge of Maligne Road some 50 kilometres outside downtown Jasper, in Jasper National Park.

Located at the eastern end of Maligne Lake, Spirit Island could well be the most famous and most photographed spot in all of the Canadian Rockies. It is accessible through a 90-minute boat round-trip during the spring and summer months when the waters of Maligne Lake are open.

It certainly looks like another of the breathtaking lakes in the Rocky Mountains but strictly speaking it is not a lake. Medicine Lake (located along Maligne Lake road) is visible only in spring and summer when it’s filling up with water from nearby glaciers and mountain peaks. The ‘lake’ starts to disappear at the end of summer / towards autumn through ‘holes’ which are actually underground channels carrying the water downstream to Maligne Canyon. What seems to be a lake is actually flooding, with the amount of melt-water overflowing the channels.

The Athabasca River Basin covers about a quarter of Alberta. It begins at the Columbia Glacier in Jasper and flows about 1,500 kilometres north-east into Lake Athabasca. The river was once used as an important waterway for fur trade by the First Nations. It’s famous emerald blue waters have somewhat suffered from fracking; thankfully this is now more and more abandoned and the water is slowly starting to turn to its former splendid colours.

Located about halfway along Icefields Parkway, Athabasca Glacier reaches a depth of about 300 metres at its thickest point. The glacier is accessible via the Ice Explorer bus or you can hike the short Forefield Trail by your own. Just make sure you wear appropriate shoes and walk carefully. Although it is still an impressive glacier, it is estimated that it has lost about half of its volume over the past 125 years due to climate change. 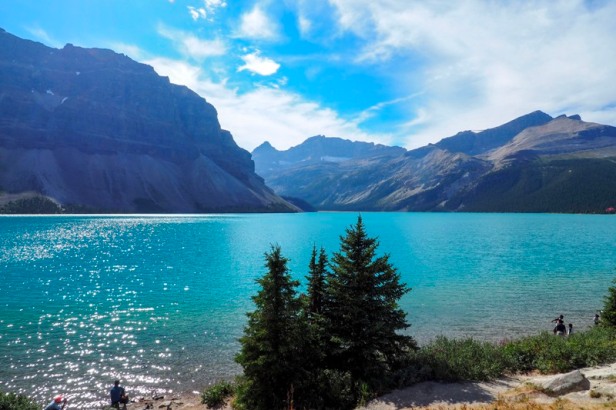 Bow Lake is one of the largest lakes in Banff National Park. Located along Icefields Parkway between Jasper and Lake Louise, there is no way you will not want to pull off in one of the various lookout points to admire the lake and its surrounding mountains.

Lake Louise in Banff National Park might be known for many particularly for being a famous skiing destination. It’s as stunning during the summer season. Make sure to be here early if you want to have the view to yourself. The promenade along the lake fills up with people very quickly in the morning, and so does the smallish parking lot. 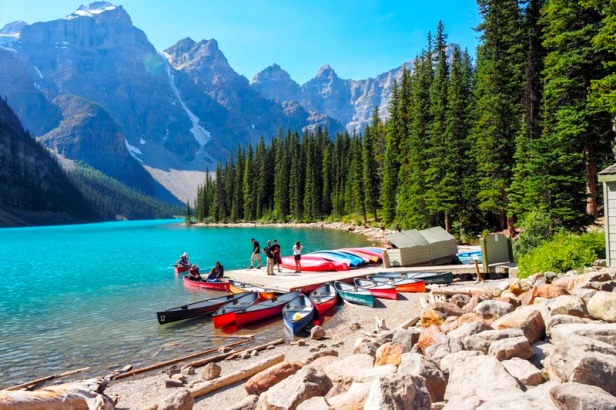 Located in the Valley of the Ten Peaks just about 14 kilometres from Lake Louise, Moraine Lake is equally as spectacular with its pristine waters and towering mountains. The mountain range behind the lake is also known as the ‘twenty dollar view’ because in the past it was featured on the Canadian twenty dollar note. 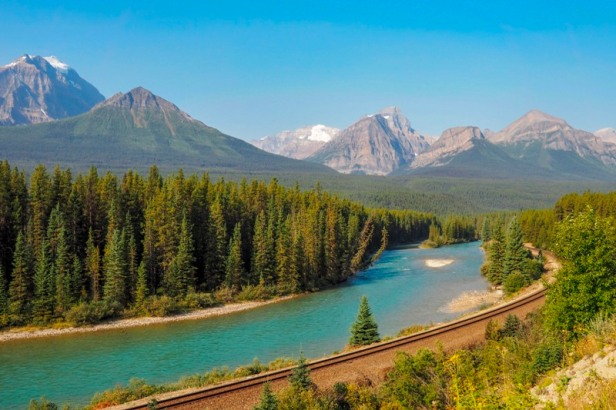 Located close to the western end of Bow Valley Parkway, not far from Lake Louise, Morant’s Curve is the number one spot to photograph trains, in particular the Rocky Mountainer. It is named after the first photographer that took pictures of trains at this very spot, Nicolas Morant, who worked for Canadian Pacific Railway. The view of the curving Bow River and the mountains in the background is absolutely breathtaking even without a train passing by.

Lake Minnewanka was made the largest lake in the Rocky Mountains when a dam was built and the area flooded in 1941. The project submerged a small town called Minnewanka Landing, a former summer holiday resort on the then much smaller lake. The name Minnewanka in Stoney language means ‘water of the spirits’ because the waters are said to be haunted.

Emerald Lake, a short drive from Lake Louise but already in Yoho National Park close to the town of Field, is aptly named for the intense colour of its waters which is caused by powdered limestone.

Have you been to the Canadian Rocky Mountains yet? What part of the area did you like most?

Spring is finally here and in the kitchen I am turning to the lighter dishes with lots of fresh seasonal produce.
I am definitely team 'white' when it comes to Torta Capese. This flourless cake that originates on the island of Capri and is traditionally made with ground almonds and dark chocolate. The white version is called Torta Caprese al Bianco di Limone - white Torta Caprese with lemon. Oh yes, and there is also a generous spash of Limoncello involved.
Easter is coming... and with it the different food traditionally eaten around the world.
Happy Birthday! Riesling turns 586 years today!
Happy International Irish Whiskey Day!
Happy National Margarita Day!
Loading Comments...
Comment
×
%d bloggers like this: