During my travels, food is always an essential part. I love to explore what a place has to offer from local market halls to fod trucks, bars, bistros, typical local restaurants and of course Michelin-Star cuisine.

Across Spain, the latter is taking an interesting twist recently. More and more places create tasting menues following the country’s famous tapas concept. With a focus on small portions, tasting menus include a considerable number of different individual dishes grouped into themes that highlight the huge diversity of each food and its traditional place in the local cuisine.

Located in the beautiful old town of Valencia, Sucede is a restaurant that has nearly perfected this style of innovative food interpretation.

The tasting menu, composed of either 23 or 28 ingredients grouped into eight to ten different courses takes the guest through a historic journey of typical local flavours. Each of the courses represents a different period, therefore highlighting the different cultural influences the city has gone through over the centuries.

The restaurant itself – one of only six in Valencia holding a Michelin star – is located at Caro Hotel, a little gem in the historic core of Valencia. Like the rest of the building from the 12th century, the restaurant too spots a number of historic archeological artefacts.

You are sitting next to the remnants of the historic Arabic wall of Valencia dating back to the Moorish occupation. And being located in the basement, with natural light coming in through a narrow spotlight window on one side of the walls, once the daylight starts fading away it almost feels like sitting in a room underwater.

Otherwise, the room is decorated with minimalistic contemporary features and clear lines.

Fun fact: the first few courses of the menu are served to be eaten with your hands. No forks or spoons provided. However, the concept is working well with the tapas style small bites.

The menu starts with a number of dishes making reference to the city’s Roman past.

First was a creation of eggs and apples. Historically, these were part of Roman celebrations and the qualis eggs topped off with a puree of apples served quite cold presents an innovative twist.

This was followed by a type of non-alcoholic wine made of water and honey, called Muslum. Very refreshing with just a touch of sweetness. 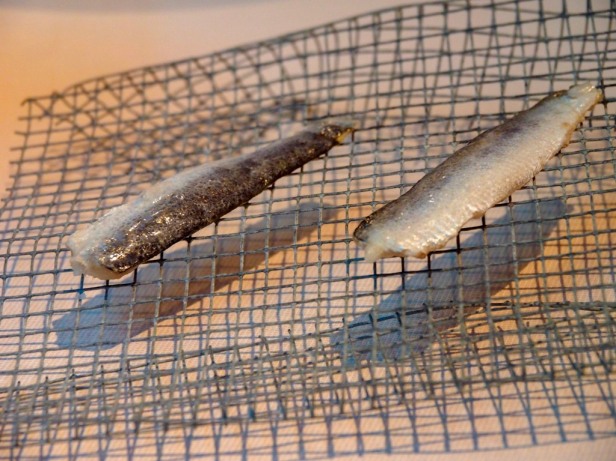 and a mussel served with a honey and vinegar seasoning, which in the ancient past was a typical way to preserve food locally.

Kicking off the next section of the menu was a creation of clam served with almond milk,

followed by veal tongue which is prepared dircetly at the table

a combination of tuna marrow and tuna with oil

and cryfish served with two different types of broth: one a crayfish and the other a chicken broth, which made for an interesting taste combination.

The next sequence of dishes was linked back to Valencia’s Arab past. 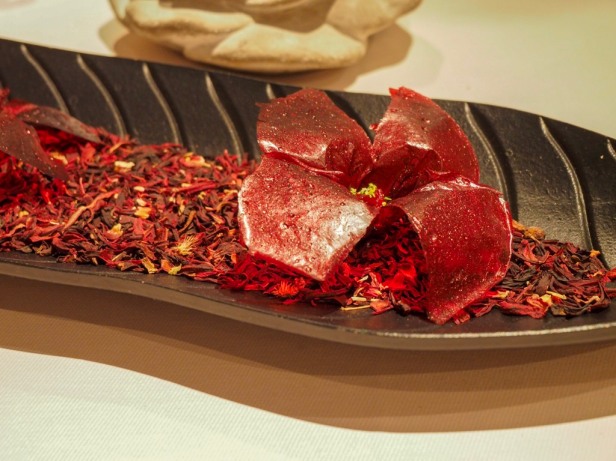 followed by an only so slightly crisp and sweetish hibiscus flower 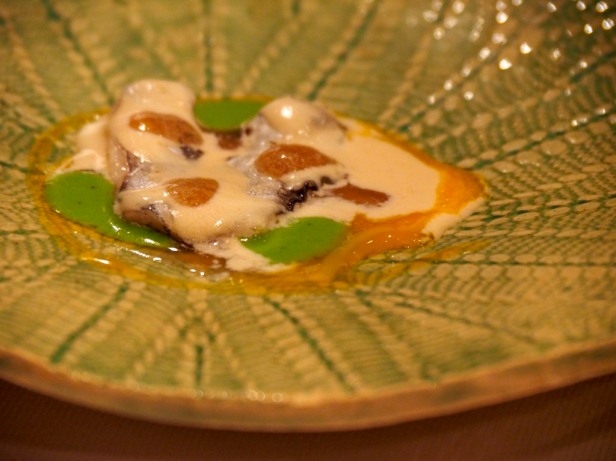 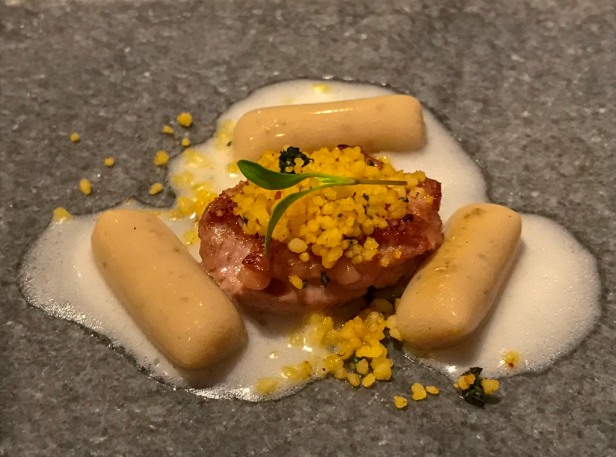 The next sequence was based all around rabbit. Sucede also makes a point to use all parts of the animal – so be prepared for some surprises!

The kick of the sequence was crunch rabbit ears

served with a foie gras of rabbit.

Next came rabbit brain and tongue – to tell the truth this is not necessarily my favoured part and it does not look overly delicious but the dish was prepared perfectly and the tasty broth complemented the slightly sweet taste very well.

To finish off the succession of rabbit was a rabbit stew served in a melon. Again, I very much liked the combination of the rich tasty broth with the slight sweetness from the melon.

Finishing off the main courses was filet of quail. 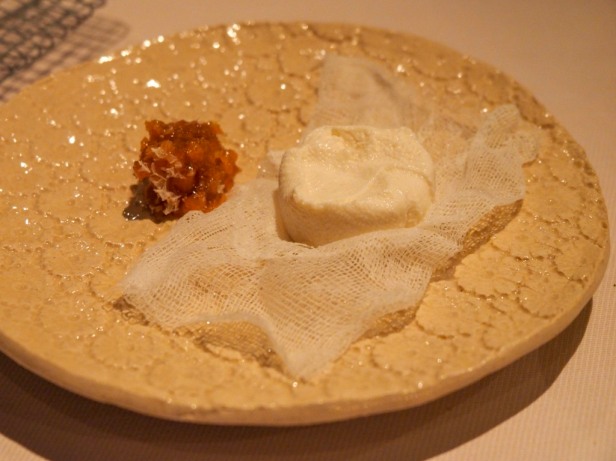 Finally arriving at the desert section, the first to arrive was a fermented Mediterranean rice served with honey and crunchy toast. 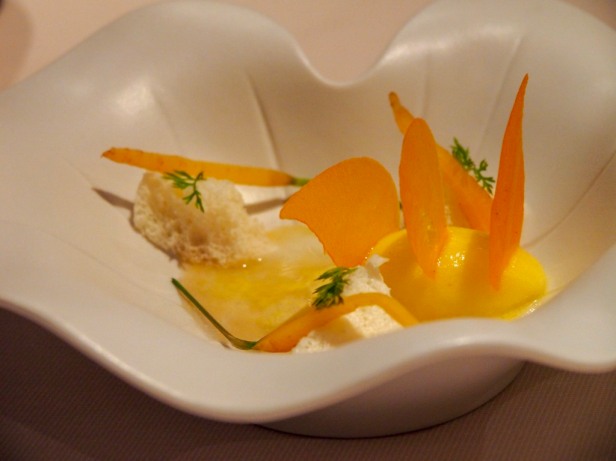 Next was a mandarin sorbet served with carrot and yoghurt 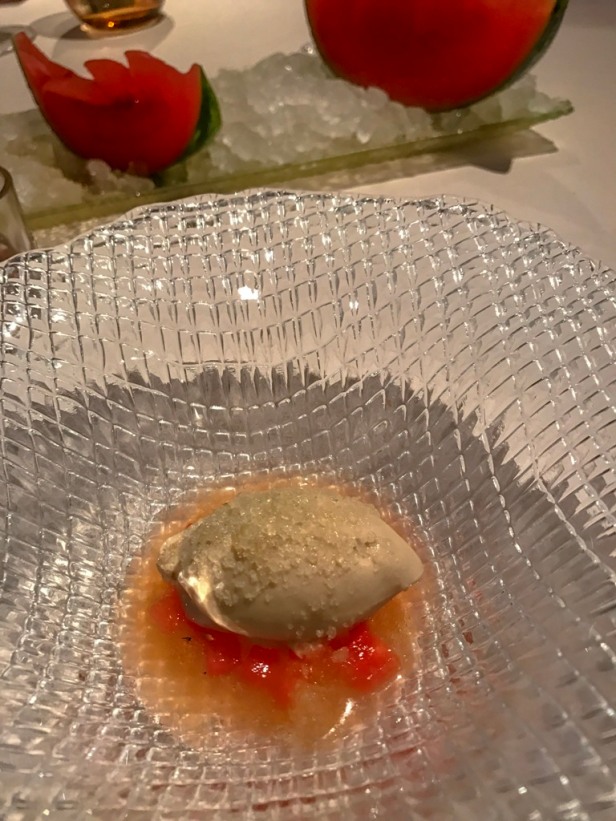 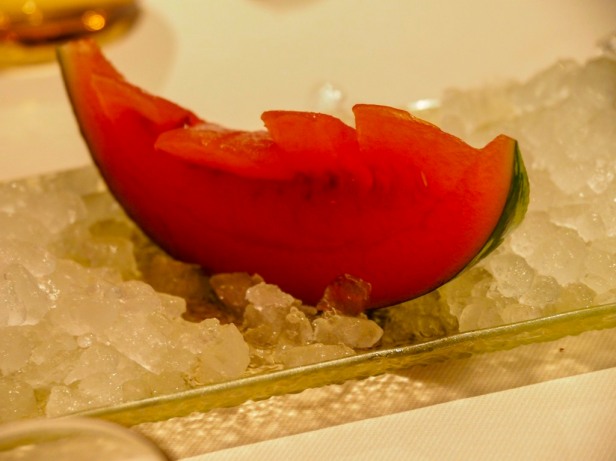 and finally, a sorbet of melon served with a slice of watermlon.