Going on a safari and experiencing the amazing African wildlife is certainly on everybody’s bucket list.

Personally, I have not experienced something more exiting, almost magical dare I say, than having the chance to observe some of the most amazing wild creatures living on our planet at close range.

If you want this dream come true, South Africa with many of its national parks larger than sometimes entire countries elsewhere is a prime destination to visit. Even better, there are many malaria-free areas offering exciting safari experiences without having to worry about medication.

I recently stayed at Sanbona Wildlife Reserve, one of the country’s largest privately owned ‘big five’ luxury resorts, where with a bit of luck you can see them all: lion, elephant, buffalo, rhino and leopard.

Sanbona Wildlife Reserve is located close to Barrydale in the Klein Karoo semi-desert, just about three hours from Cape Town.

It’s an easy drive and part of it will lead you long Route 62, the longest wine route in the world, through the beautiful Breede Valley.

Stopping along the way to visit some of the valley’s excellent wineries might be tempting. However, you probably want to arrive at the reserve around mid-day in order to settle in and be ready for your first game drive in the afternoon.

This means it is essential being at the gate no later than around 12 am to make the 15 kilometre gravelled-road drive to the welcome lodge in time to be picked up by the reserve’s own vehicle. Unless you want to continue navigating in your own car on a gravelled and at times farily bumpy road for another 30 to 60 minutes (depending in which of the lodges in the reserve you stay).

Located at the foot of the Warmwaterberg, Sanbona extends across an incredible 54,000 hectares, with most of the area composed of wide open Karoo plains.

Sustainability is at the heart of everything that is done at Sanbona with a particular high focus on conserving water, controlling erosion and overall paying high respect to the environment.

A still ongoing rehabilitation programme was started in 2002 to restore the area’s biodiversity and reintroduce locally extinct species.

Today, there is a huge variety of animals on the reserve including alongside the big five also the riverine rabbit (one of the world’s most endangered mammals), over 200 different bird species, klipspringer, giraffe, springbok, antelope, zebra, and hippos.

But more on the resident animals later on. First, let me tell you a bit about the amazing lodges at Sanbona.

There are four different luxury lodges scattered throughout the vast area of the reserve, all spotting different styles and offering slightly different experience. 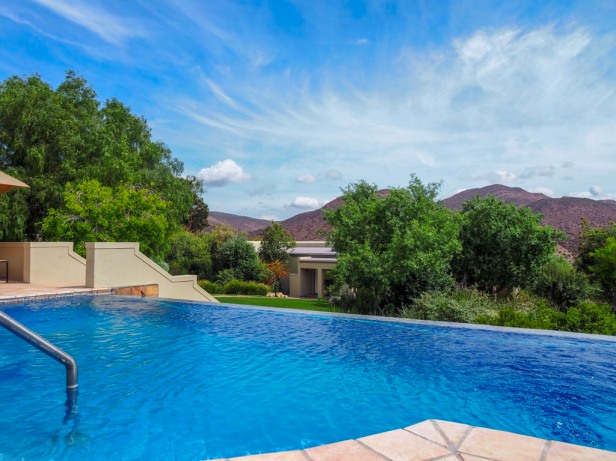 We stayed at Tilney Manor, build around a carefully restored farmhouse dating back to 1898. With only six luxury rooms offering space for 12 guests, this is the most exclusive lodge and also adult-only. 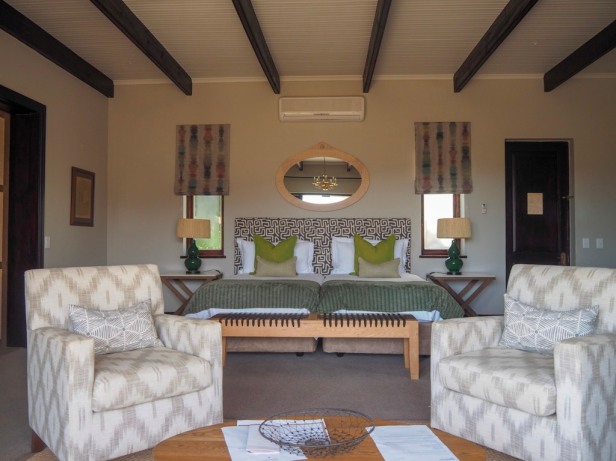 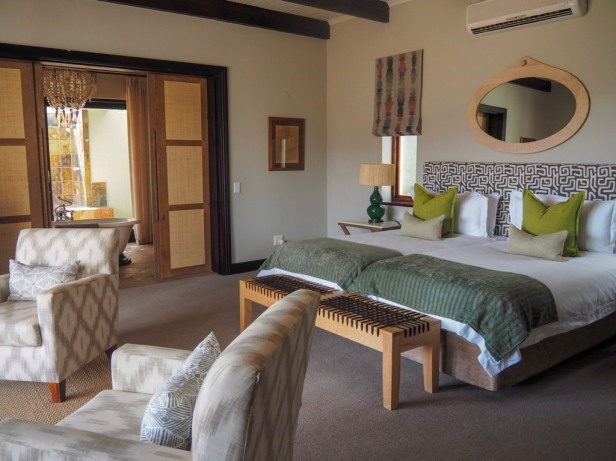 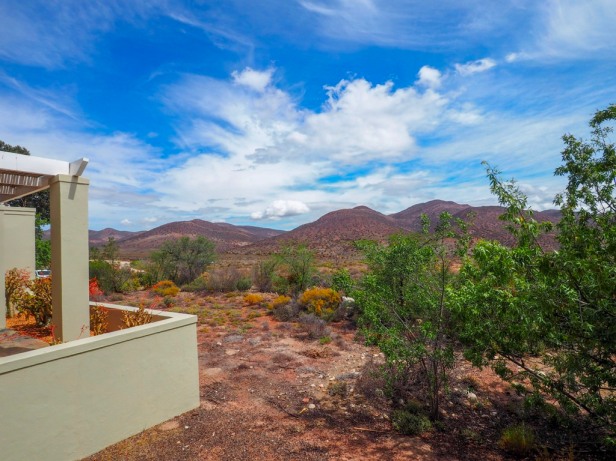 The spacious rooms were amazing, lightly decorated in a modern African style and complete with an en-suite bathroom, outside shower and a private terrace offering spectacular sweeping views over the wide plains. 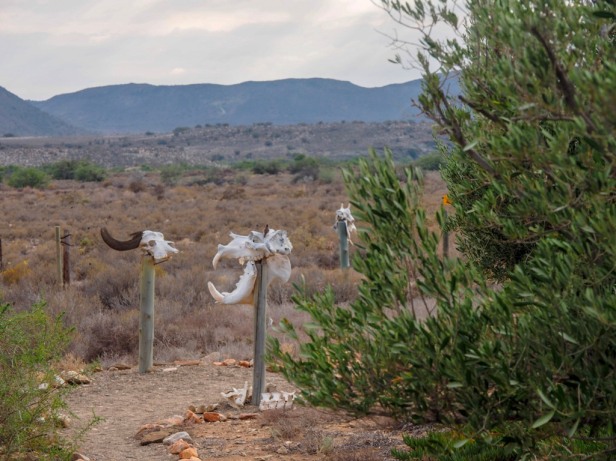 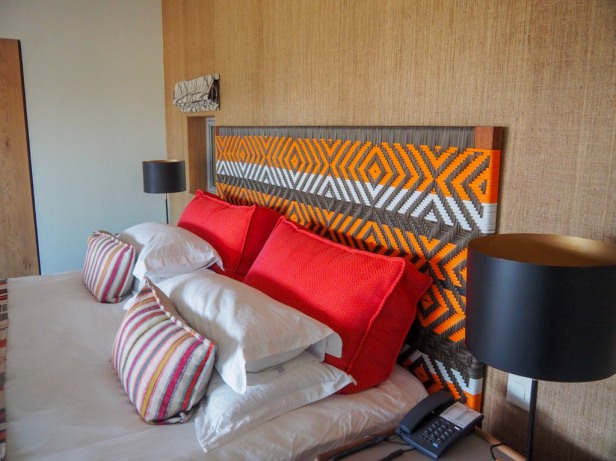 Gondwana Family Lodge is ideal for families and has 12 comfortable inter-connected rooms, basically turning them into a two bedroom suite when needed.

Several of the rooms over stunning views over a nearby waterhole.

There is even a kids club at Gondwana where kids can learn about the local wildlife and if they are still too small to go on game drives (they have to  at least four years) will be looked after while their parents are on a drive. 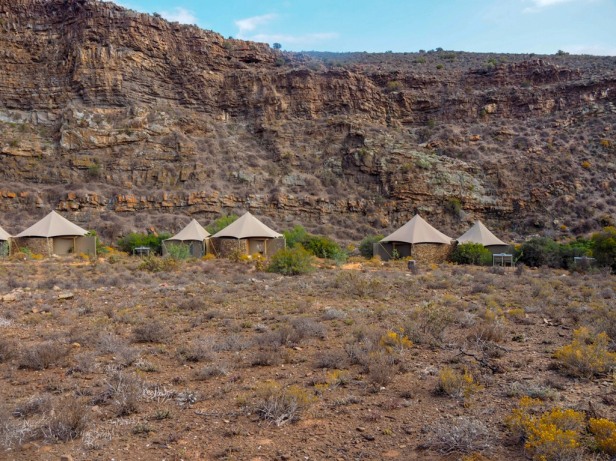 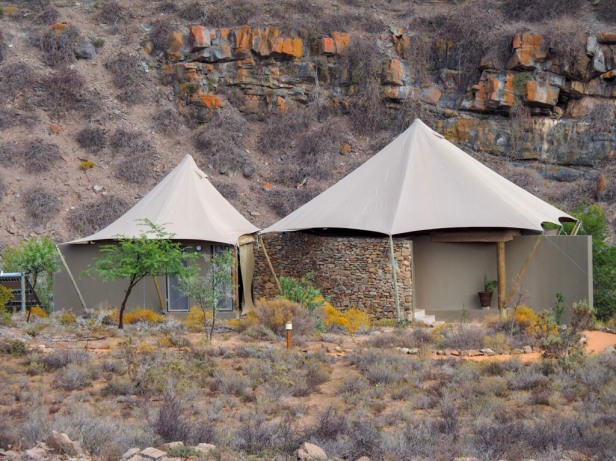 If you are after a more traditional African safari feeling, Dwyka Tented Lodge with nine luxurious tents each with their own heated Jacuzzi will cater to this. Albeit tent does not really make justice to beautiful huts nestled at the food of a dry Karoo ravine.

Going even a step further, the Sanbona Explorer Camp (a tented camp open during the summer months) offers walking safaris – an up-and-coming trend across Africa.

Clearly, the main objective visiting a game reserve is to observe wild animals in their natural surroundings. At Sanbona, you will get lots of opportunities to do just that.

There are two daily game drives, one in the morning and one in the afternoon, each taking around three hours. 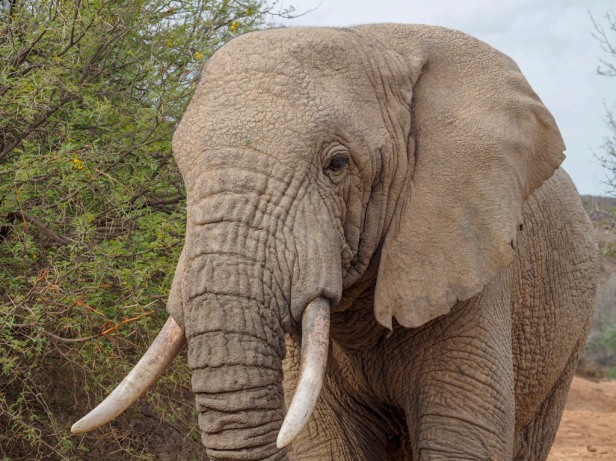 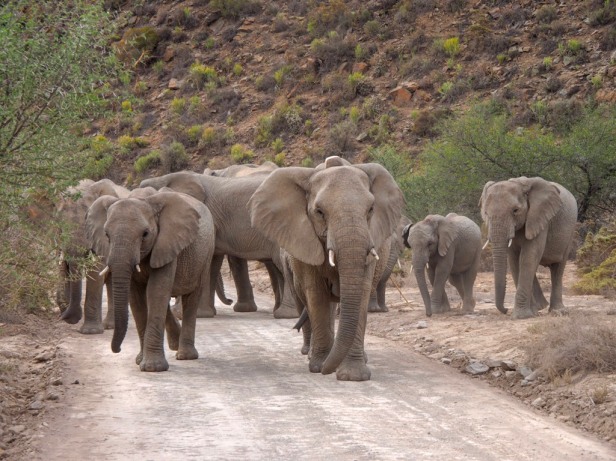 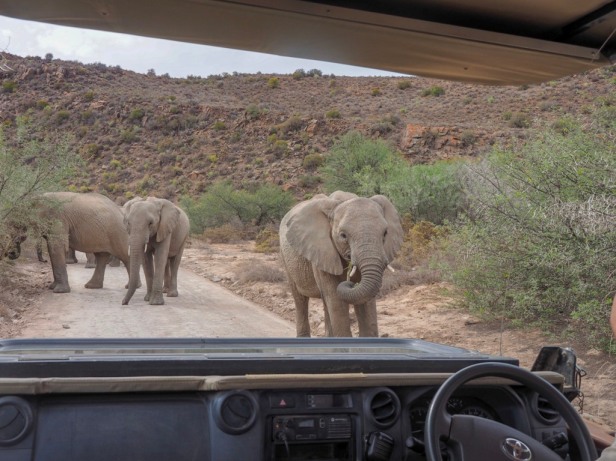 Your ranger will be in constant contact with the other rangers to exchange information about wildlife sightings to make sure all guest will get the opportunity to see as many of the different animals on the reserve as possible. 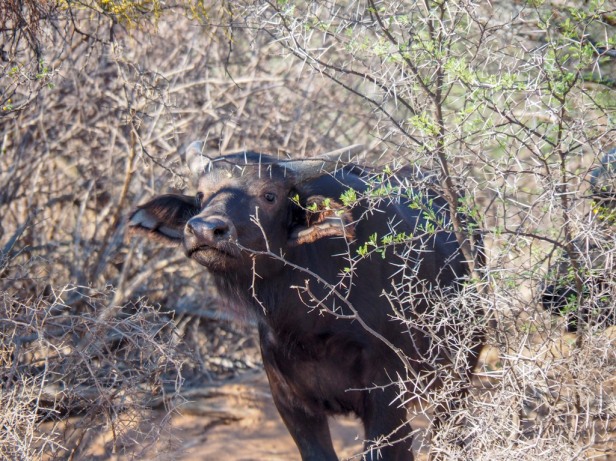 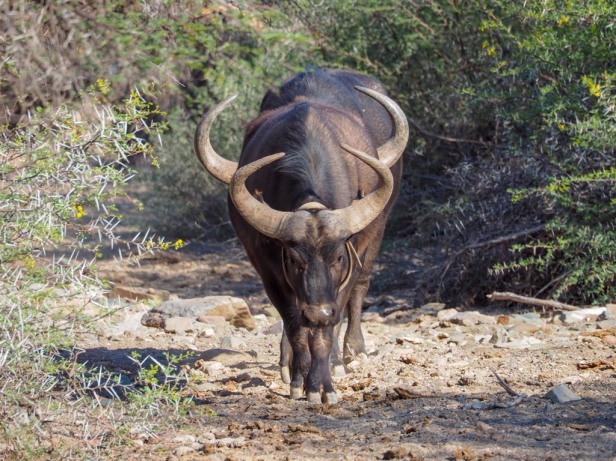 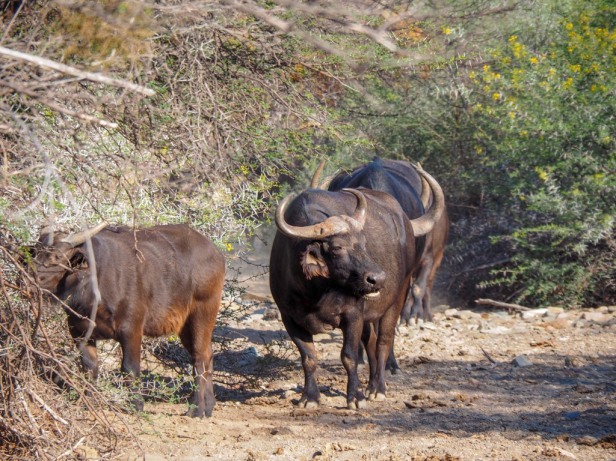 We were indeed able to see all of the big five; albeit we saw the leopard only from a really long distance. 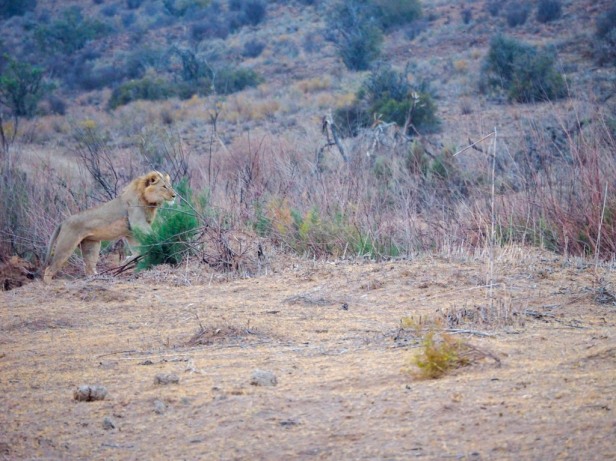 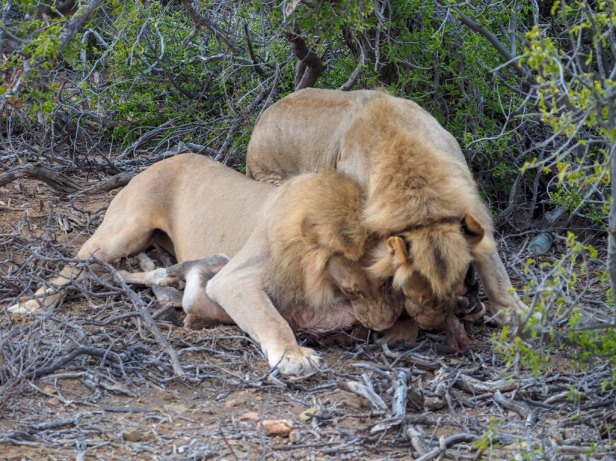 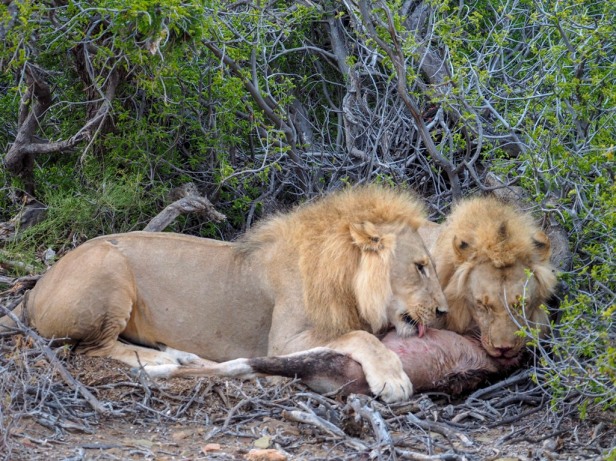 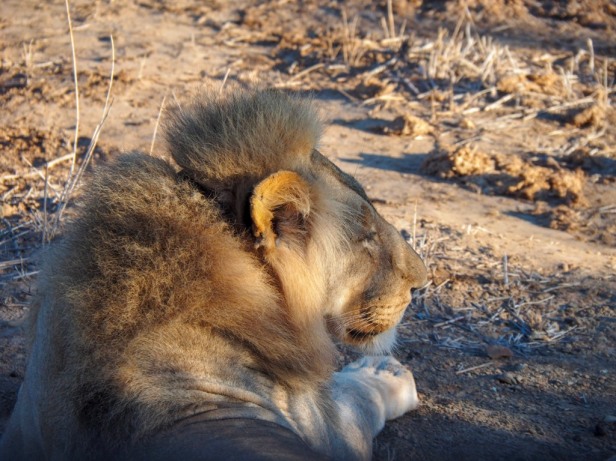 To make up for that, we were not only able to observe some of the reserve’s lions up close. We actually saw them during a hunt, which is a quite rare thing to happen as we were told by the rangers.

Sanbona is actually home to white lions, which are quite rare and it’s estimated there are less than 20 left in the wild. However, at the time of our visit these two were kept in a boma, which is an animal enclosure that is typically used to tend to animals when they are introduced to a new reserve. In fact, Sanbona was introducing a new female lion on the reserve to strengthen the bloodline of the offspring. We learned that she would not get accepted to the pack and consequently hunted and likely killed if she was just released into the wild. Thus the two resident adult lions and the new lioness needed to get accustomed to each other and would only lave the boma once they had formed bonds. 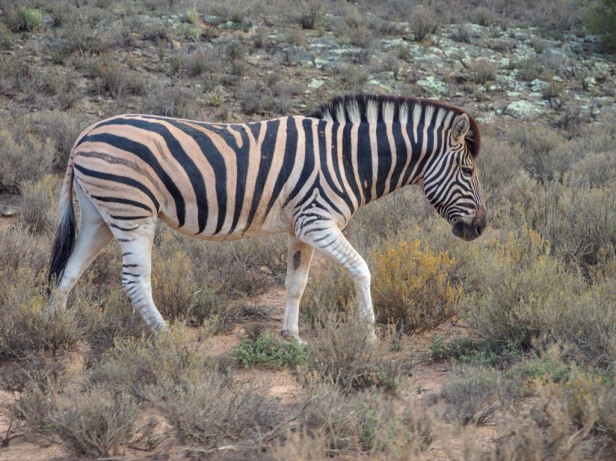 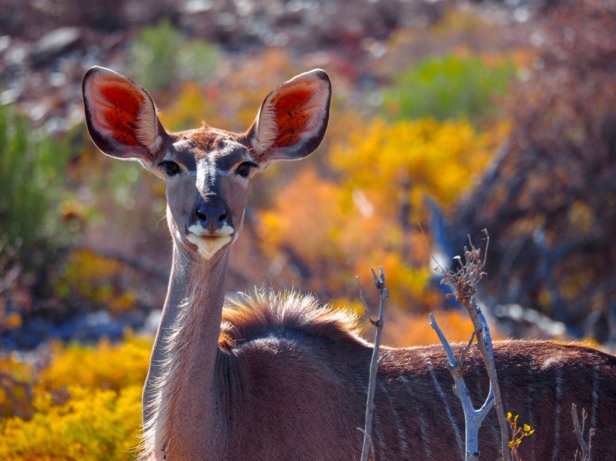 Alongside the big five, at Sanbona you will also see lots of other animals, big and small. 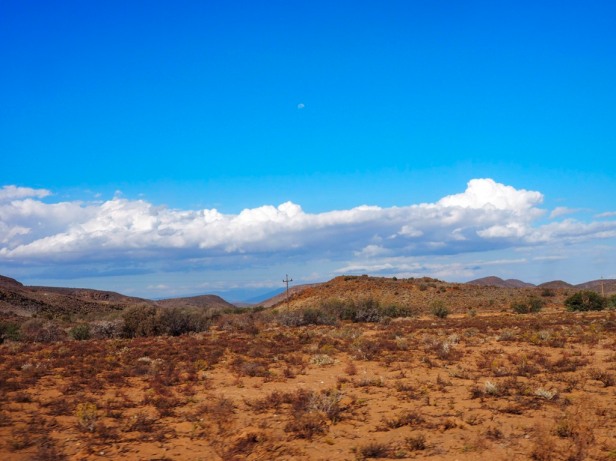 And whilst animal sightings will be certainly on top of your agenda, the scenery in this semi-arid region is also breathtaking of its own.

Have you been to an African safari yet? Let me know about your experiences.