Are you planning to visit Toronto, the largest city of Canada and capital of the province of Ontario? If you don’t, believe me you should put it on your bucket list straight away.

Located on the north shore of Lake Ontario, Toronto was initially founded as a French trading post. Fast forward, it has become one of the most diverse and culturally eclectic metropolises in North America.

Yet walking the streets of this nearly three million city, you will hardly get the feeling you are in the largest city in Canada (and the fourth largest in North America). Even in the main financial district, with its many high-rise buildings, there is a fascinating mix of old and new woven into each other, making the city such a fascinating place to explore.

So if you are planning to visit Toronto and have two days, read on to find out about the best you definitely need to explore.

What to do and see in Toronto in 2 days

At just over 550 metres, CN Tower is undoubtedly the most famous and certainly the most visible landmark of Toronto. Built in 1976 by Canadian National Railway as a communication tower, it held the title as the tallest building in the word for several years before it was overtaken by Burj Khalifa in Dubai in 2009/10. 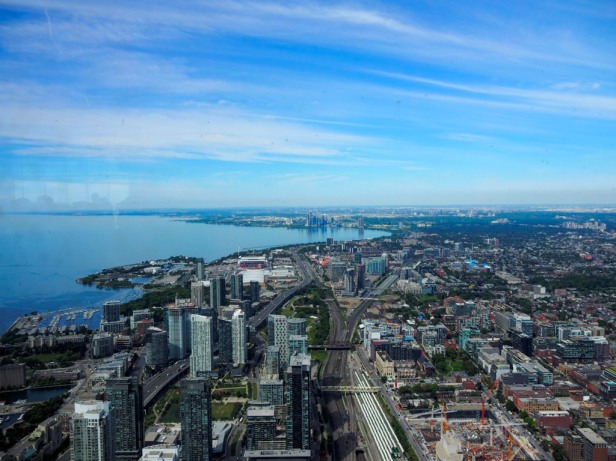 From the top, CN tower offer stunning 360 degree views over the city and its surroundings. There are actually different opportunities to experience CN Tower.

The general admission ticket will get you to the general outlook platform at 113 stories above ground (around 350 metres). The ticket includes the glass floor, which is now installed directly above the original one on the level below the lookout platform.

A second visitor platform, the Skypod is located another 33 stories above the general platform (at around 450 metres). You can combine the lookout and Skypod with a merged ticket for the two or head to Skypod only (Skypod admission ticket). In case you are the very adventurous type, you can also book into the Edge Walk. You will be literally hooked to the outside edge of the tower walking around a small walkway at around 360 metres high. At the time of writing, tickets for the Edge Walk were around CAD 195 per person.

And here’s a little curiosity about CN Tower: The whole lookout area is actually a glass floor. However, there are quite a few visitors who prefer not to step on the glass as it can be quite head-spinning. So early on when the tower was first opened to visitors and the whole area spotted a glass floor only broken up by some small concrete aisles, in order to avoid the glass floor many visitors only walked along those aisles. This caused a huge congestion so today most of the glass floor is covered with carpet so people don’t realize they actually walk on glass.

At the foot of CN Tower you’ll find Ripley’s Aquarium of Canada which is home to around 16,000 maritime creatures from all over the world (and around 5.7 million liters of water hosting them). It is also spotting the longest underwater glass tunnel on the North American continent.

Just across the street from CN Tower and Ripley’s Aquarium, the Toronto Railway Museum is an indoor and outdoor museum which actually stretches over several areas of downtown Toronto. Outside, you can see several historic railway carriages and a miniature train ride whilst inside you can see other historic artifacts along with a train simulator where you can learn how to drive a train using real controls.

Built in the 1800s, the Parliament of Ontario remains the seat of the Legislative Chamber of Ontario. You can join a free tour of the building or even watch life proceedings of the House of Commons, or if you come in the morning watch the changing of the guards (at 10 am). 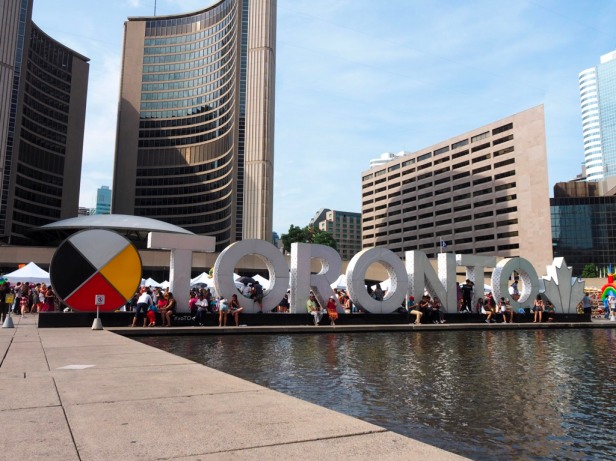 Nathan Phillips Square is home to the famous Toronto sign. It’s a hugely popular spot that draws huge numbers of visitors and is a popular spot for locals too. On the two occasions I went here, I observed three (!) wedding parties making pictures in front of the Toronto sign. If you come by night, the sign is illuminated in different colours.

Directly opposite Nathan Philips Square located on the corner of Queen and Bay Street you will find the gorgeous Old City Hall, built at the end of the 19th century in Romanesque style. It makes for an awesome contrast with the surrounding high rise buildings.

If you ask someone for a hip place or an ‘insider tip’, chances are high they will come up with Kensington Market. It is an area to the north of the downtown area packed with shops, cafés and restaurants.

To be honest, I did not get the hack of the area immediately. Starting at Augusta Avenue, there were a couple of nice buildings, and the famous quirky garden car is something you don’t see all the time,  but shops and restaurants did not strike me as that great you have to come here specifically.

However, turning the corner and strolling through some of the other streets in the quarter, I quickly had to change my mind. The colourful historic buildings and quirky street art are just too stunning to be missed. Plus, the shops away from the central Augusta Ave are indeed quite unique and worth spending some time to explore.

Toronto Waterfront stretches over 30 kilometres (20 miles) along the shores of Lake Ontario. The area owns its current look and feel to a very forward looking government that in the 1970s launched an extensive regeneration programme.

Definitely head to Harbourfront Centre which is a beautiful mix of arts and culture with lots of theatres, galleries and studios. There are countless events taking place in this area, so there is always something going on for every taste. 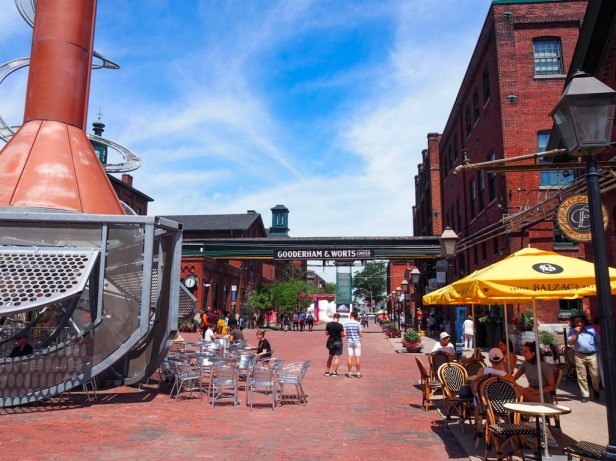 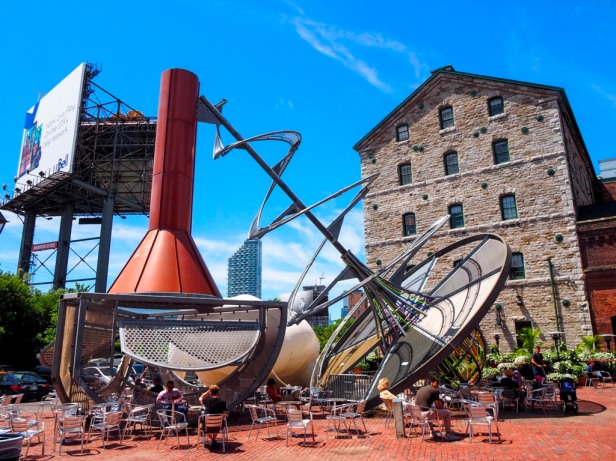 Once home to Gooderham and Worts Distillery, today Distillery District with its Victorian-era industrial architecture dating back to the 19th century is a top destination for arts, culture and entertainment of any sorts. 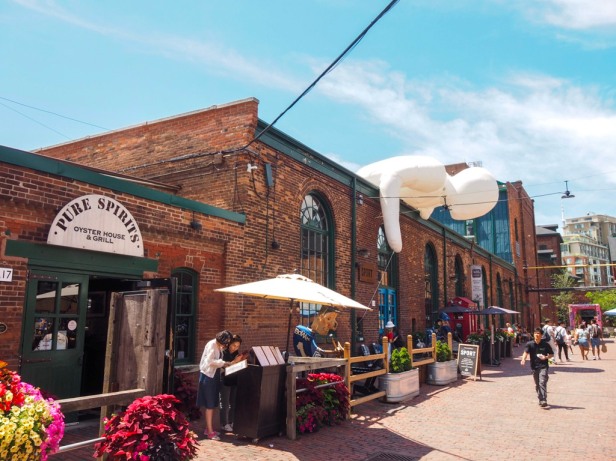 The pedestrian-only area is home to numerous independent shops (no international chains are allowed here) along with many cool restaurants, cafes and bars.

Permanent and changing art installations are an additional attraction – and should you visit during December, Distillery District is where you find Toronto Christmas Market.

If you love whisky, gin and vodka; or indeed all three of them than you can also have an remarkable experience at Spirit of York Distillery. There is an awesome tasting room, or you can book a tour through the facility. 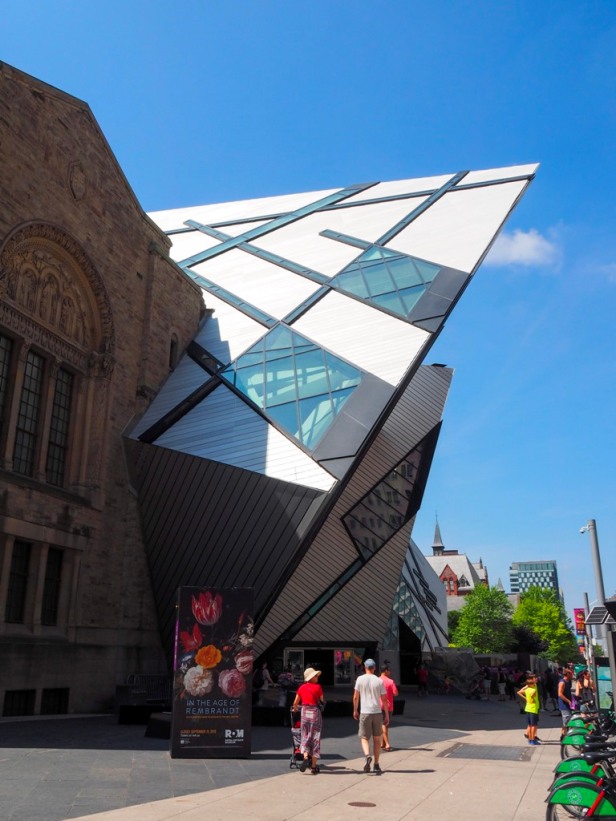 With over six million objects, Royal Ontario Museum is the largest museum in Canada. Inside, you will find several permanent exhibitions like the Natural History Gallery to World Culture and Earth Treasure, as well as various temporary exhibitions. If you are a fan of museums, no doubt you will find lots of exiting stuff to explore. For me, it was rather the quirky architecture itself with the relatively recent addition resembling a futuristic pyramid, woven into the historic building. No surprise it is a national landmark. 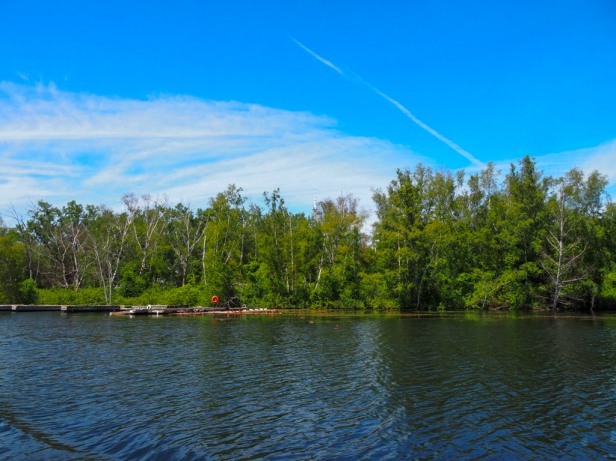 If you fancy some beach time or other outdoor activities like hiking, biking, kayaking or stand up paddling, you need to head to Toronto Island Park. About 15 minutes by ferry from downtown, the park consists of 15 islands in Lake Ontario, connected to each other by bridges. There are three different beaches and lots of different trails crisscrossing the area.

Centreville theme park on Centre Island is a particular popular destination for families and should you be around in Spring there is also a cherry blossom orchard.

However, probably the best reason to visit are the incredible views over the Toronto skyline.

Though you can admire the Toronto skyline from a water taxi going to the Island Park, there are alos numerous harbour tour cruises that will provide you some awesome views. Depending on the tour you chose a tour will take between an hour and two and you will sail by the waterfront, Toronto City Airport, and the various islands.

Tucked away in the midtown neighborhood, the 98-romm Edwardian-style Case Loma is one of Toronto’s most popular landmarks. The impressive mansion was built in the early 1900s for a wealthy businessman, Sir Henry Pellatt. Though it’s never been a real castle, it certainly looks like one and it is also constantly referred to as Toronto’s very own castle.

Today the building is owned by the city and it is the place for many events throughout the year. It also doubled as setting for a couple of famous movies, including X-MAN!

If you want to explore the indoors and five acre garden filled with various sculptures and fountains, you have to pay an admission fee (CAD 32.50 per adult at the time of writing), which is definitely worth it.

The building spots three floors plus a lower level and some of the most jaw dropping rooms are the great hall, the grand library, the conservatory, the Sir Pellatts’s and Lady Pellatt’s Suites, a bowling alley, and a huge wine cellar.

There is also an underground tunnel leading to the former stables and a car garage, today an automotive museum. 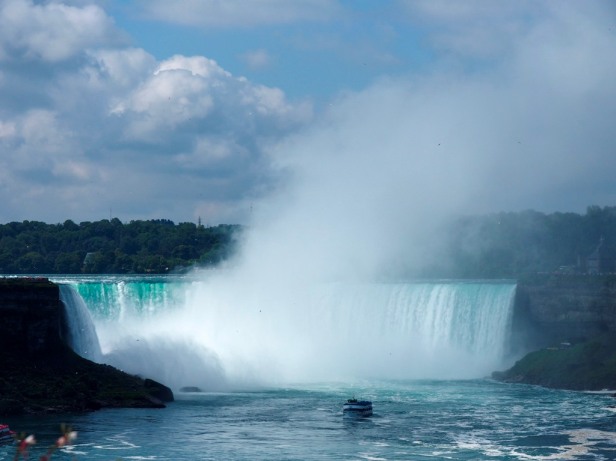 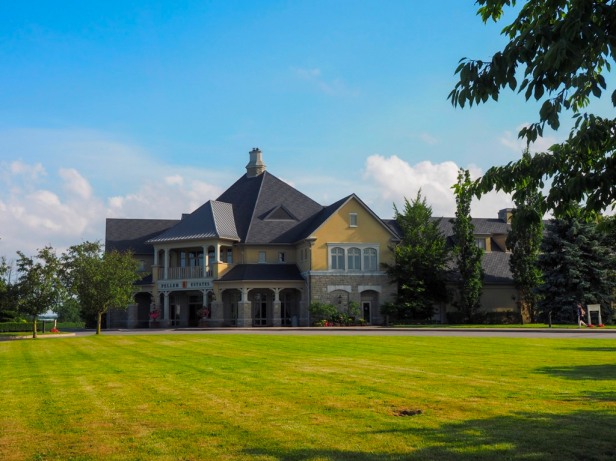 Should you have more time visiting, Toronto is the perfect gateway for a trip to the nearby Niagara Falls and Niagara wine country. You can visit the area in a day trip from Toronto, or even better spend an additional night or two admiring the perhaps most famous falls in the world and touring the excellent small boutique wineries of the Niagara peninsular.

Have you been to Toronto yet? Let me know about your experiences.

2 thoughts on “How to spend two amazing days in Toronto”

In occassion of today's World Cocktail Day, I virtually travelled to Italy to enjoy a couple of the classic Italian cocktails you need to sip in order to make a trip to Italy complete.
Lovers of Sauvignon Blanc have something new to look forward to. The world's first wine route dedicated to a single varietal has opend to the public this past Sauvignon Blanc Day.
Did you know, not all Mezcal are Tequila but all Tequila are Mezcal?
Currently indulging in a rather unique Bellini Cocktail...
Spring is finally here and in the kitchen I am turning to the lighter dishes with lots of fresh seasonal produce.
I am definitely team 'white' when it comes to Torta Capese. This flourless cake that originates on the island of Capri and is traditionally made with ground almonds and dark chocolate. The white version is called Torta Caprese al Bianco di Limone - white Torta Caprese with lemon. Oh yes, and there is also a generous spash of Limoncello involved.
Loading Comments...
Comment
×
%d bloggers like this: