Sitting on a sun-lit terrace, a glass of bubbly in hand, taking in the breathtaking swiping views over the stunning Walker Bay area. Kicking off my stay at one of the true gems in South African luxury hospitality could have hardly started in a better way.

Hermanus, the small historic fishing town on the Cape Whale Coast of South Africa, which has become famous thanks to the incredible whale watching opportunities in the area, had been on my list for a long time already.

Thus I was very excited I got the opportunity to head out to Hermanus recently; even though it was outside the whale watching season.

And since regularly visiting the beautiful Cellars-Hohenort, one of the three hotels forming part of the Liz McGrath Collection, there was no question that finally heading to Hermanus list during my latest trip to the Western Cape would be the perfect occasion to tick off another of the brands properties staying at The Marine.

I know, trusting pictures on a hotel specifically when it comes to its precise location can sometimes be misleading; and in most cases the reality is more on the disappointing side. For example, you will not see the busy street separating your beach facing hotel from that very beach or that the former huge green field next to the property now is a busy development site.

That said, arriving at The Marine in Hermanus was actually a pleasant surprise. 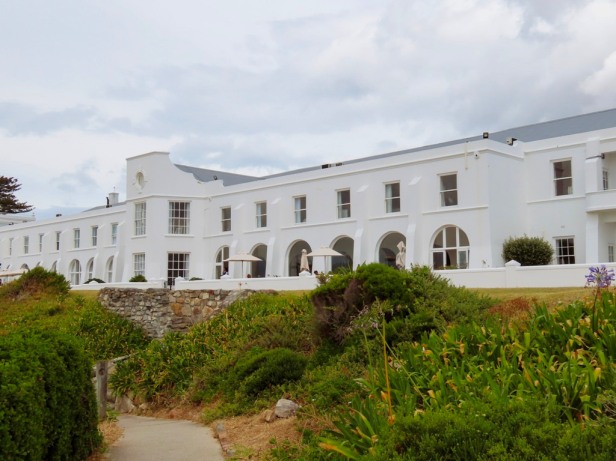 The hotel is located on the famous cliff path stretching for around 11 kilometres along the coast of Hermanus, with breathtaking views over Walker Bay. I’d seen many pictures of the long-stretched historic white building sitting on top to the cliff; but I’d also recently seen a picture that seemed to place the hotel just in front of what looked like an industrial plant.

Hence, arriving I was a bit worried what I would found.

Well, the hotel is indeed not located in a secluded spot on the coast but actually pretty much centrally; a mere two minutes walk from the old town centre. Meanwhile, the industrial plant turned out to be a shopping centre district and whilst not necessarily a beautifully designed area it was much less disturbing as I thought it might be.

Indeed, despite its location within the town and bordering one of the main roads, The Marine still manages to create a feeling to be a tranquil oasis away from the buzz of the town. Being able to walk to most of the town’s main attractions for me was in the end actually a plus.

What staying at The Marine in Hermanus is like

Though this was my first visit to The Marine, being a regular for more than 10 years at Cellers-Hohenort, I was immediately absorbed by the familiar subtle touches, furnishings and decor that stands for the Liz McGrath Collection; making me feel right at home.

That said, The Marine still has its very own identity. The colour scheme of blue, white and pastel colours – owned to the proximity to the ocean – along with the spectacular views over the rugged coastline of Walker Bay subtly underlines the hotel’s maritime character throughout.

Dating back to the early 1900s, the property still thrives with its history whilst any contemporary luxury has been carefully build in, providing the visitor with a wonderful experience and relaxed atmosphere.

Located either on the ground or first floor, The Marine offers rooms in three categories: the entry level double rooms facing the courtyard or street, the seaside facing luxury double rooms or the premier suites also facing the seaside.

Sticking to my usual habit not spending money purely on a view – after all the time spend in your hotel room is usually limited – I’d opted for an entry level double room which provided all the modern comfort you would expect from a five-star hotel.

Due to the historic proportions of the property, all rooms have a slightly different layout but all have a small living room area and spacious en-suite bathrooms. Some of them even open out to a private terrace or balcony.

The pool and spa area

Though The Marine is located off the coast, it is far from being a beach hotel. Off course, there is a small pool located in the small courtyard area behind the Pavilion (and not very conveniently accessible only via the Pavilion meaning you have to pass through the restaurant during service which in our case was during Christmas lunch, so this felt rather unsettling).

Next to the pool there is also a small Spa offering basic and signature treatments.

If you rather feel you need to submerge yourself in the sea, just down the cliff is a tidal pool. Though it is public, it is usually not crowded. Likely because the water here is fairly cold and there are sharp rocks and sea urchins so it’s recommended you wear dive shoes and bodies; though I did not see anybody doing this while swimming here.

Dining options at The Marine 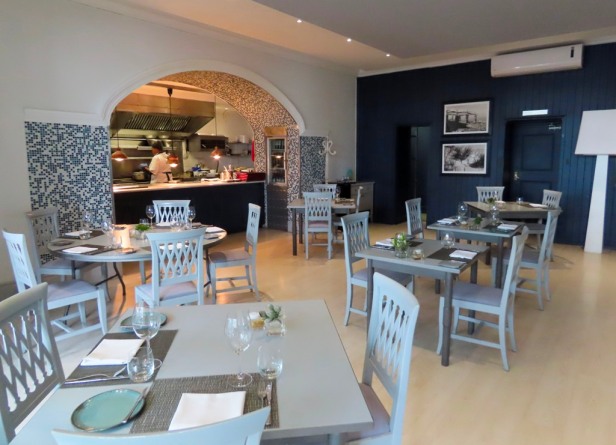 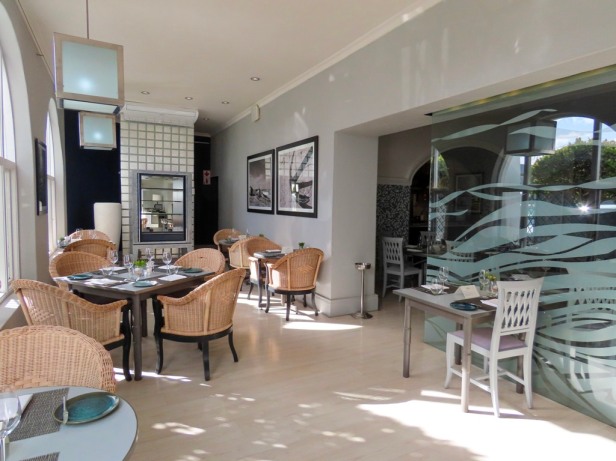 Dining at The Marine is first and foremost about Origins, the hotels fine dining spot. It is, typical for South Africa, a laid down spot with a small open kitchen area allowing you to observe the action.

Expect fresh seasonal food that honours a traditional South African cuisine presented in a modern way with local staples like an absolutely delicious springbok and off course a generous choice of seafood.

During the day, the Sun Lounge offers snacks and cocktails as well as a fabulous high tea.

Breakfast is served in the Pavilion, and the small but well curate buffet was another reminder this is a Liz McGrath property. Small but well curate, you find fresh pastries, fruits, yoghurt, ham and cheeses, as well as a freshly squeezed juices.

In addition, there is a hot breakfast served at the table. 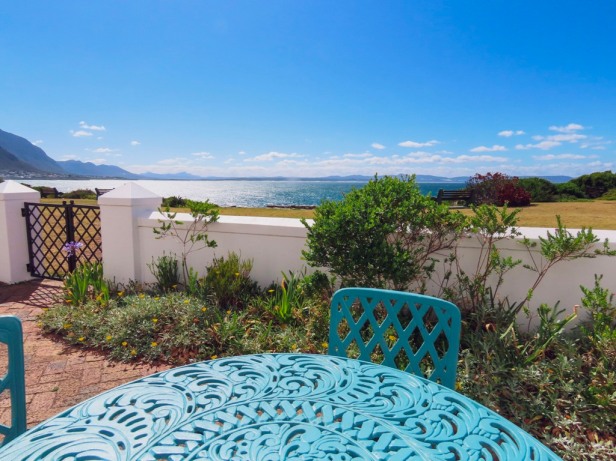 I’d been very much looking forward to breakfast on the terrace, basking in the spectacular views over the Atlantic Ocean. Being out of luck with the weather, this was not to be but I still managed to get an idea later on in the day when the sun came out.

If you want to know what to do visiting Hermanus, read my post Best things to do in Hermanus beyond whale watching.

I had a wonderful time staying at The Marine experiencing the brands superb service and attention to detail as well as the excellent cuisine and unbeatable ocean views.

Where to stay if you love good food and want to explore an exciting wine region?
We are just past the Summer Solstice, the day with the longest hours of daylight here in the northern hemisphere.
The first wine estate in the world to make Riesling wine, Schloss Johannisberg in the Rheingau remains one of the major attractions in the area.
Don’t wait for Derby Day to enjoy a refreshing classic Mint Julep.
On April 25th Italy celebrates Liberation Day, a public holiday in the whole of Italy … but did you know it’s also the Feast of Saint Mark (Festa di San Marco) in Venice?
HAPPY EASTER!
Loading Comments...
%d bloggers like this: