Breathtaking views over the surrounding vineyards and the blue band of the Rhine river winding through the valley below, paired with luxury accommodation and award-winning food and wine. What else could you ask for from a visit to the gorgeous wine growing Rheingau region, just a short drive outside of Frankfurt? 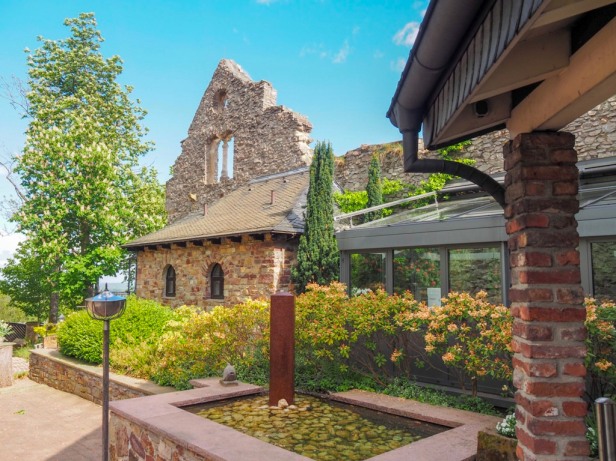 Hotel Burg Schwarzenstein, a member of the renown Relais & Chateaux group, is not your usual castle hotel though. What appears to be an old, restored castle ruin was actually built exactly that way only in the 1870s by famous vintner family Mumm as their summer residence.

The property – after changing hands a couple of times – was bought in 2004 by a husband-and-wife team having the firm intention to turn it into the region’s leading location. It’s safe to say, the mission was accomplished. Though Burg Schwarzensteinis not the only luxury hotel that has collected awards for its cuisine in recent years, it is certainly among the very best the Rheingau area. 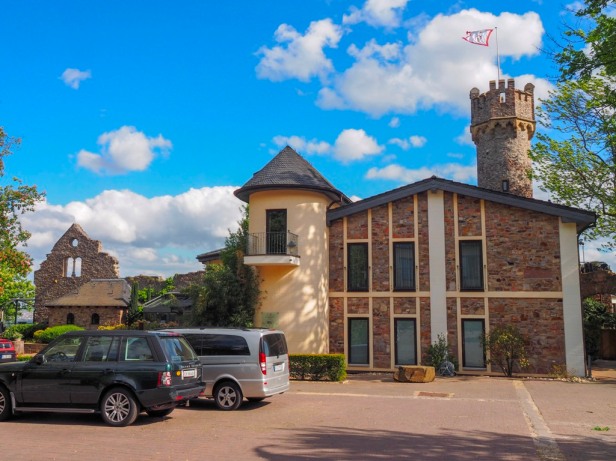 Hotel Burg Schwarzenstein is actually divided into the old castle building where a number of rooms and a restaurant are located and the rather unassuming modern building, the so called park residence which is home to the hotels modern luxury rooms and suites.

Once you step inside the park residence, you are greeted with a purist modern style featuring clear lines and an elegant colour scheme of cream, gray and brown throughout the lobby. 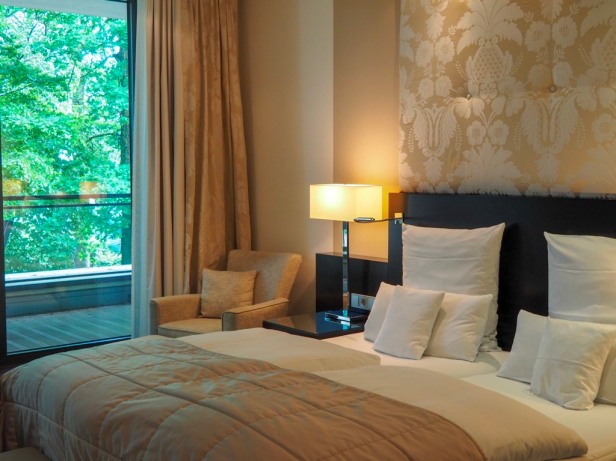 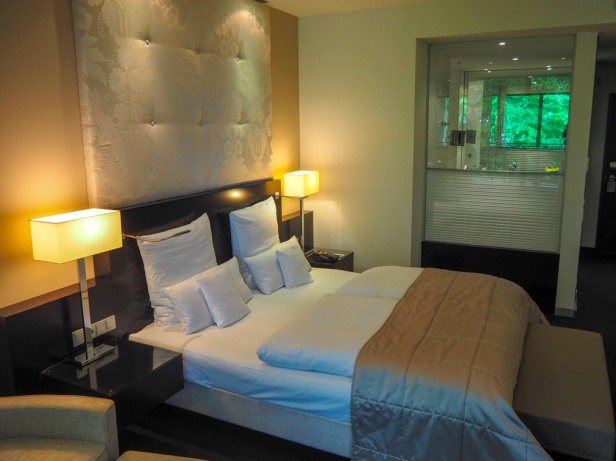 The spacious rooms boast delicate fabrics that continue the lobby’s elegant colour scheme. Large floor-to-ceiling windows create a sense of airiness and open up onto a little terrase.

The large marlbe-clad bathroom is stuffed with toiletry products from French label Hermes. 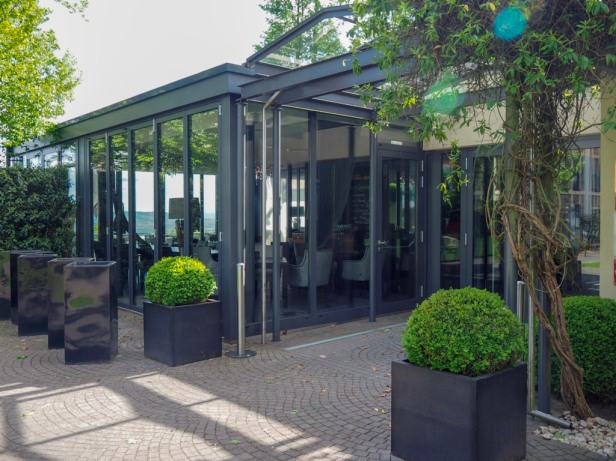 There are three restaurants on the premises, including the Castle Restaurant that offers a traditional regional cuisine, and located in a separate little glass pavilion, the modern grill bar and the Michelin-starred Restaurant Schwarzenstein Nils Henkel.

As we had booked lunch at the Michelin-star restaurant the next day, for the evening we opted to eat at the romantic Castle Restaurant. In part because the third restaurant, the Grill Bar, like the fine-dining venue is also looked after by Nils Henkel and albeit it has a totally different food style, we wanted to check out the hotels other executive chef Falk Richter. His menu strongly focuses on traditional regional produce, with simple but delicious dishes.

Before we headed to the restaureant, we started off the evening with pre-drinks in the little bar located in the park residence lobby.

Located in the oldest part of the property, the (albeit fake) castle ruin, the Castle Restaurant oozes a lot of classic charm. Tables are tucked away in two separate alcoves suspended above the vineyards, offering a splendit view over the vineyards and the Rhine valley below.

During the warmer summer months, the beautiful open terrace is perfect to enjoy lunch or dinner. 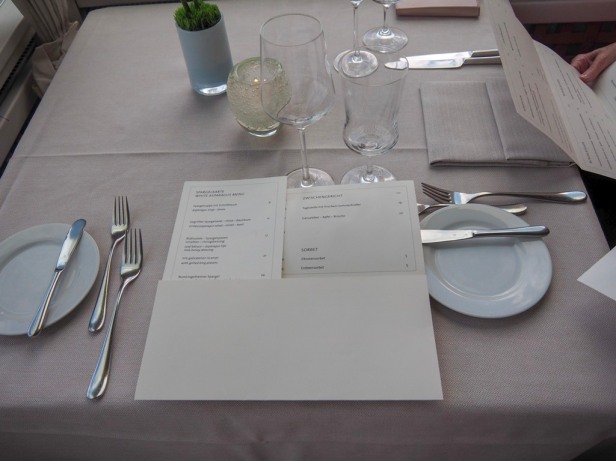 Since our visit this time fell into the German white asparagus season (which runs from April to mid-June) I could not withstand ordering from the special asparagus menu. If you have ever visited Germany during the asparagus season, you will know the country is going crazy for that vegetable. I have to admit, I too am one of the asparagus addicts. It’s a vegetable that is best eaten in its plain form and the Castle Restaurant’s menu beautifully reflected this with a number of very classic dishes. 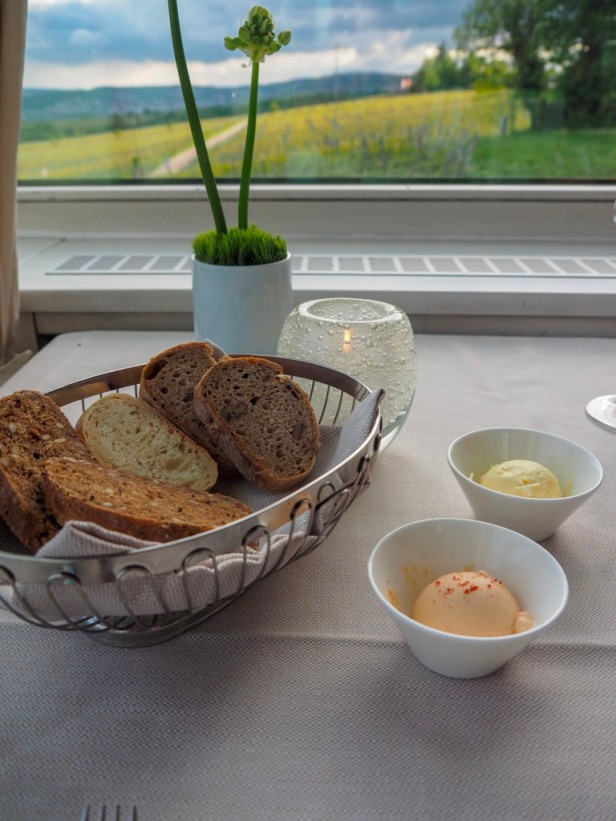 A nice bread basket with a little selection of fresh bread, plain butter and a very creamy tomato ricotta preceded the menu.

To kick off the menu was a white asparagus soup with chives. This very traditional combination brought out the delicate mild and slightly earthy asparagus flavour very beautifully. 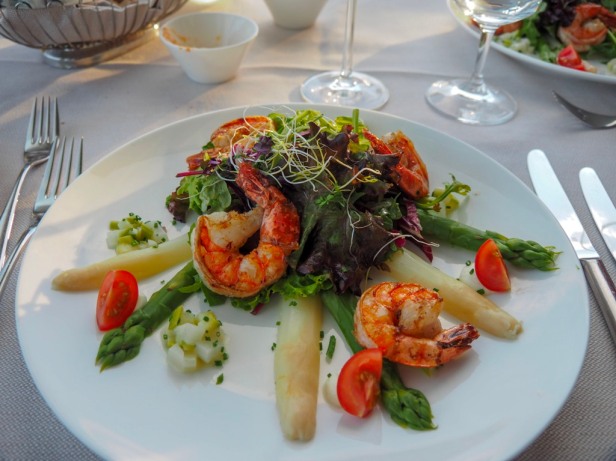 Next up was a lettuce salad packed with bright leafy flavour, served with crunchy whithe and green asparagus tips and grilled king prawns. 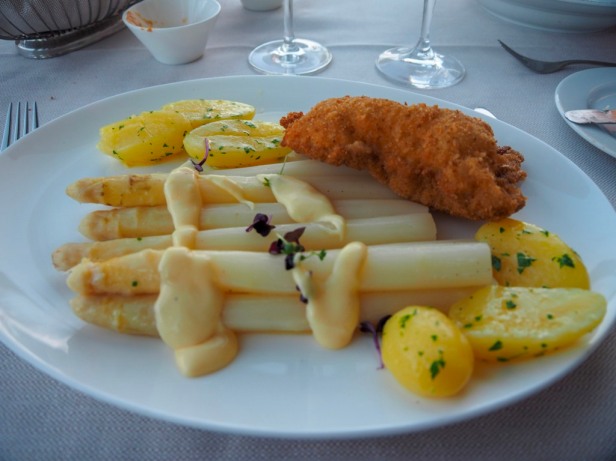 The main course was one of the most traditional and simple German asparagus dishes: a bunch of white asparagus with a thick sauce hollandaise and new potatoes. To add some meat to the mix, I chose a Wiener Schnitzel as a ‘side’. The asparagus was cooked exactly as I like it best: soft in textur while still a bit crunchy.

Ending the evening was a panna cotta dessert with raspberry compote and woodruff ice cream. Though the panna cotta was not as fluffy and creamy as I would have preferred, being closer to a Bavarian cream in its consistency, the flavour combination worked very well. 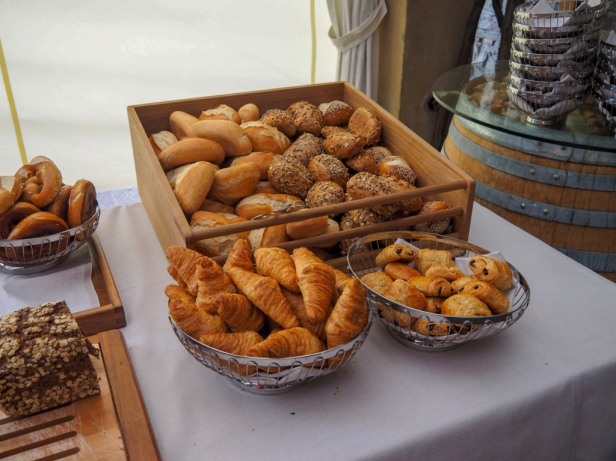 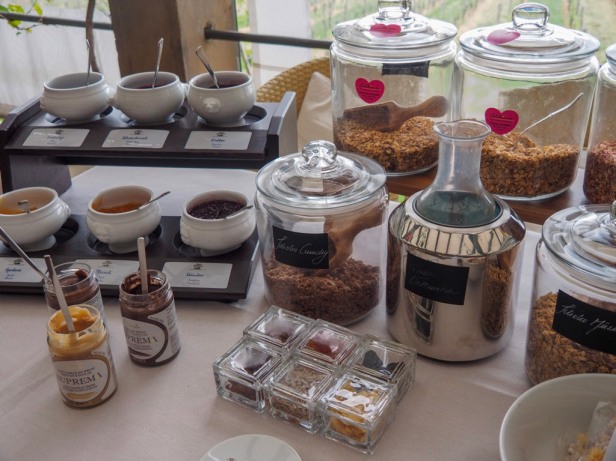 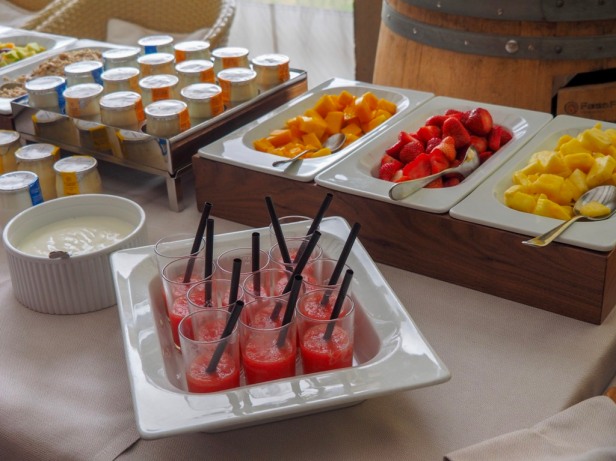 Breakfast too is served at the Castle Restaurant. The buffet is set on the restaurant’s summer terrace (with window shades and warming lights protecting food and guests from getting too cold). It had everything you could ask for: a good choice of freshly baked bread, croissants, jams, fresh fruit, charcuterie, cheeses, salmon and a most delicious crab salad.

Spring is finally here and in the kitchen I am turning to the lighter dishes with lots of fresh seasonal produce.
I am definitely team 'white' when it comes to Torta Capese. This flourless cake that originates on the island of Capri and is traditionally made with ground almonds and dark chocolate. The white version is called Torta Caprese al Bianco di Limone - white Torta Caprese with lemon. Oh yes, and there is also a generous spash of Limoncello involved.
Easter is coming... and with it the different food traditionally eaten around the world.
Happy Birthday! Riesling turns 586 years today!
Happy International Irish Whiskey Day!
Happy National Margarita Day!
Loading Comments...
Comment
×
%d bloggers like this: