Though Frankfurt is my home town I always struggle to recommend visiting. The city is mainly a place to work and most people travel here because of business, whilst leaving the town for leisure. That said, it clearly spots a number of beautiful locations worth being explored.

Just recently, one more has been added: the newly reconstructed / refurbished historic town centre. And it is really beautiful!

Obviously, Frankfurt’s historic core is not new and has always been a major attraction for locals and visitors alike. In fact, it once used to be one of the largest German historic city centres, adorned with a number of beautiful medieval half-timbered houses.

Unfortunately, the area located between the Römerberg and Domplatz over the past few decades had started to become a bit run-down and lost most of its inhabitants and businesses. To prevent the area from falling into complete dereliction, a huge reconstruction programme was carried out.

Reconstruction largely followed historic blueprints and as far as possible included original construction materials. In addition, several decorative elements that had survived the bombings of the second world war but since were kept at other sites or in local museums have now been returned to their historic locations. 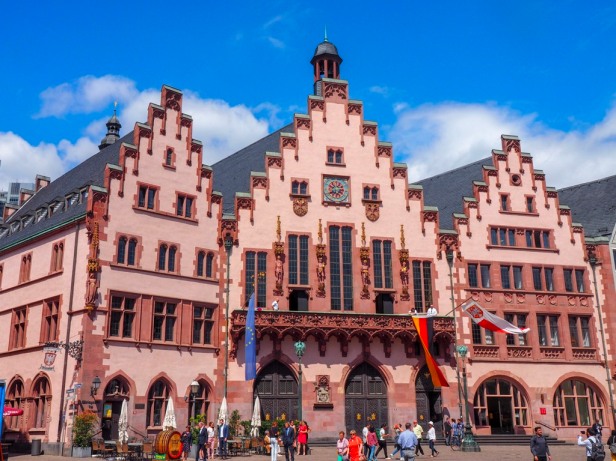 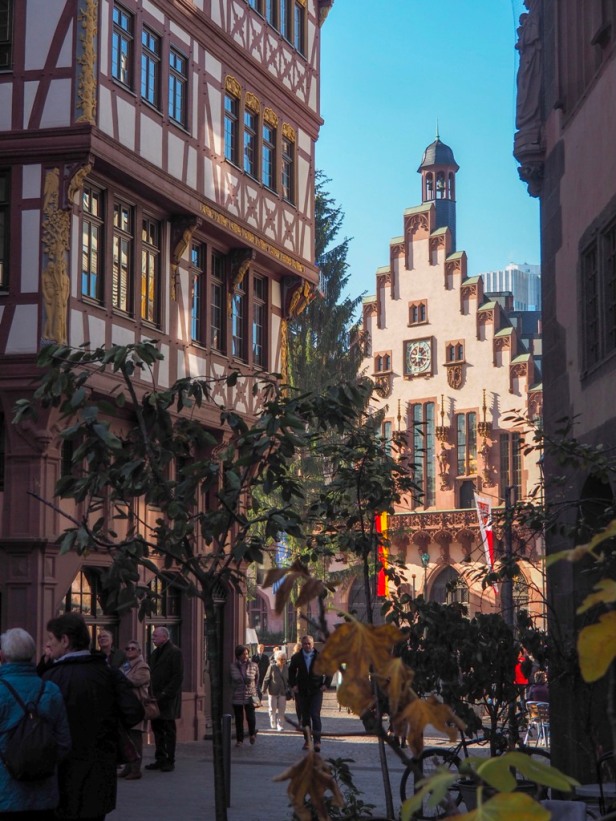 The beautiful former Patrician mansion with its prominent three-gabled roof which goes by the name of ‘Römer‘ has served as Frankfurt’s city hall since 1405 and to this day remains the seat of the city’s Lord Mayor; still used for official happenings and events. It also remains the home of the local civil registration office and is very popular for weddings.

Inside, the impressive Emperors’ Hall draws its name from a celebration hold here in 1612 in honour of the crowning of Emperor Mathias. The hall remains the main venue for official town receptions and ceremonies. It is open to the public daily from 10 am to 1 pm and 2 pm to 5 pm except when official events are taking place. 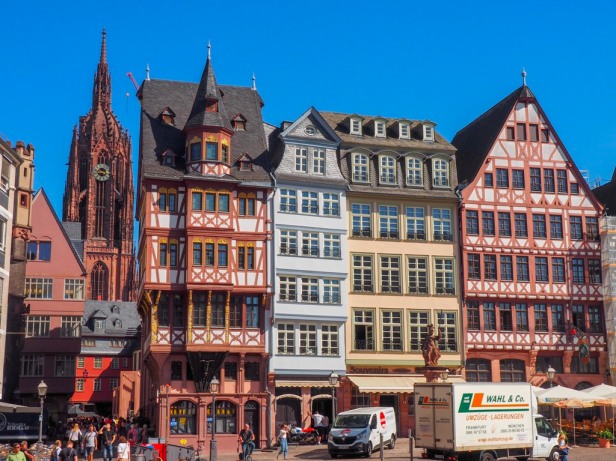 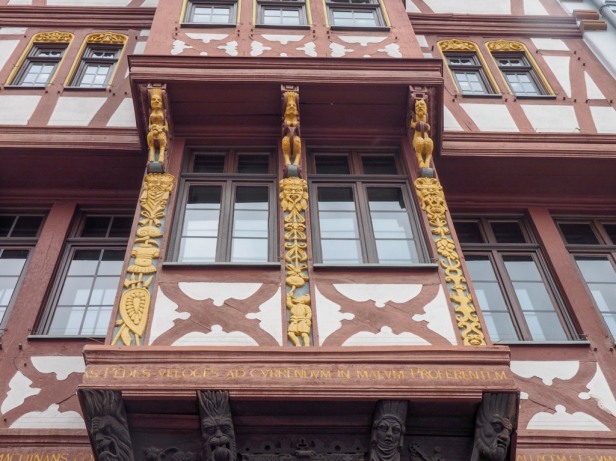 The traditional half-timbered houses that always have characterized Römerplatz (the areal in front of the Römer) have also undergone renovation, returning to a real splendour.

Fun fact: every one of the houses bears its own name. The building on the left hand corner is named ‘Grosser Engel’ (big angel) and once was the home of the city’s first bank.

Also sitting on the old town square, Alte Nikoleikirche (Old Nikolai Church) is another well-known sight. It dates back to the 13th century and it is believed it once served as royal chapel for the noble Staufen family, which were a dynasty of German kings in the Middle Ages and also ruled the Kingdom of Sicily from 1194 to 1268. 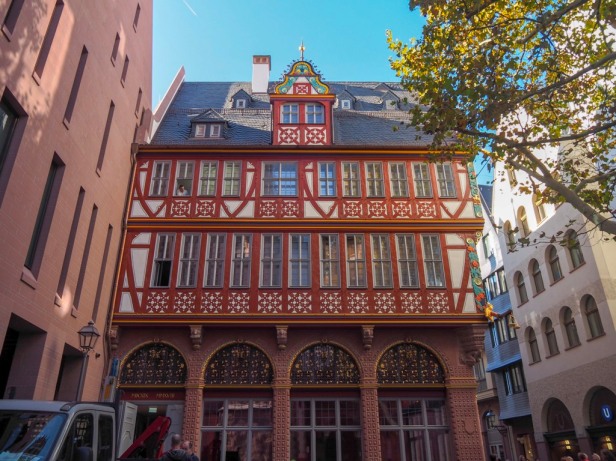 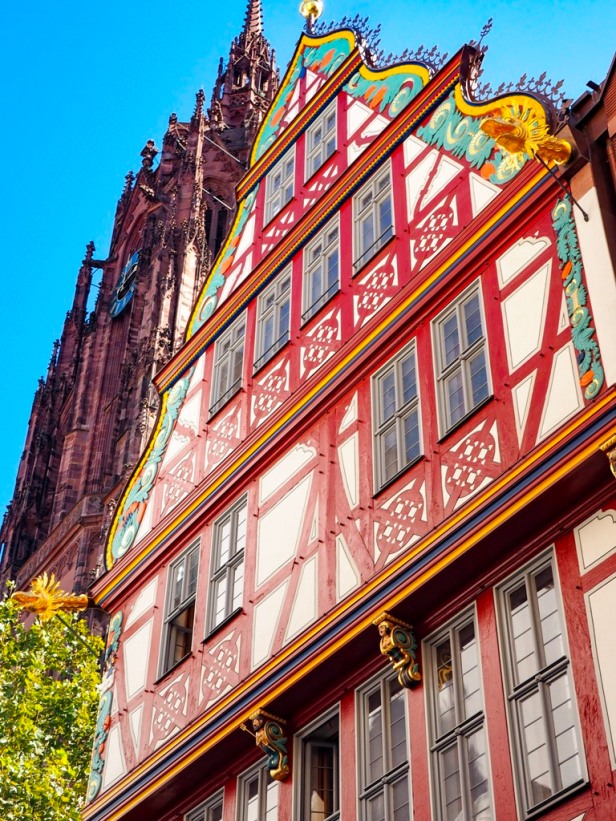 Perhaps the most beautiful building in the whole area is located a bit hidden away in a small alley next to the cathedral. Haus zur Goldenen Waage (house of the golden weighbridge) was built between 1616 and 1619 by orders of a local wealthy business man. It was nearly completely destroyed in 1943 and has now been reconstructed based on old images and recovered blueprints. 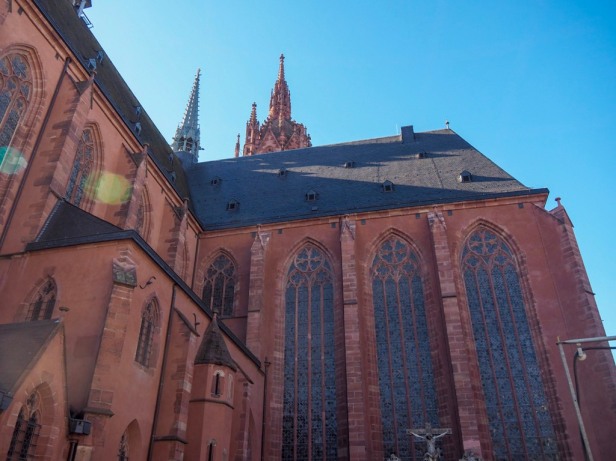 Albeit it is called a cathedral, the Emperor’s Cathedral St. Bartholomew (locally referred to simply as the ‘Dom’) never was a true Episcopal church. Instead, it served as electoral site for kings of the Holy Roman Empire for more than two hundred years from the mid 1500s to the late 1700s and for this reason was called a cathedral. The original historic building was partly destroyed by a fire in 1867 and later reconstructed in a neo-Gothic style.

Nestled between Römerberg and the cathedral, the historic Hühnermarkt (which translates into chicken market) was completely destroyed during the war and remained deserted until the early 1970s when a large concrete building was built that covered the whole location. The rather ugly building was always hated by the local population and in 2010 was demolished to make room for the reconstruction of the historic area; and the ‘new’ Hühnermarkt has quickly become one of the old centre’s main attractions.

Built in 1892, the impressive neo-renaissance fountain at the Hühnermarkt built by local sculptor Friedrich Schierholz is dedicated to Friedrich Stoltze (a German writer and poet from the 19th century originating from Frankfurt). It was removed after the destruction of the square and hosted elsewhere in the city but has now returned to its old location. 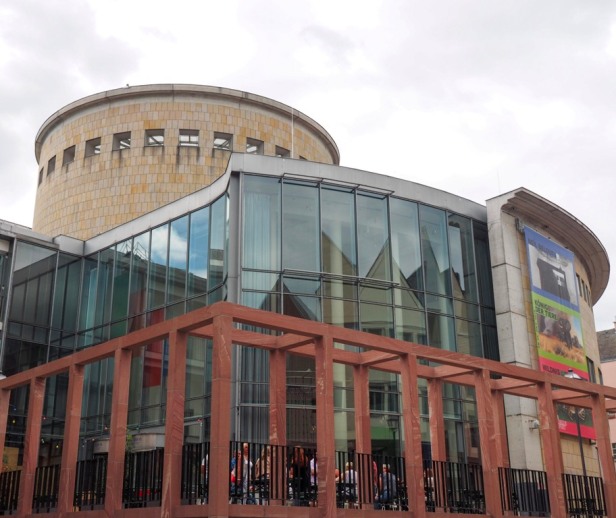 However, the historic town centre is not only home to historic buildings. The area also spots a number of more recent structures, including several of Frankfurt’s most important museums, including the renown Schirn Art Hall. 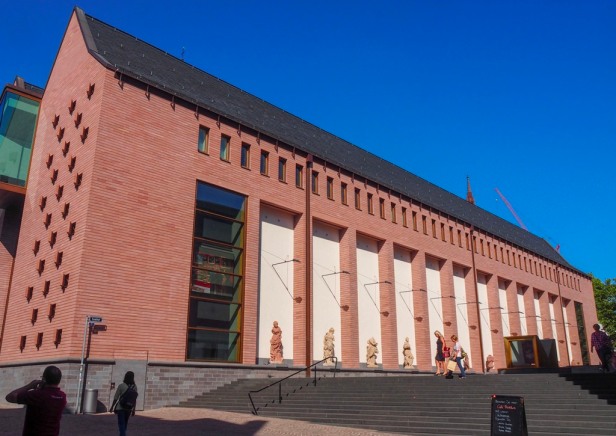 A sleek brick building which opened in 2015 and replaced a structure added to the area in the 1970s is part of the Historisches Museum Frankfurt, a museum of the city’s culture, art and history. 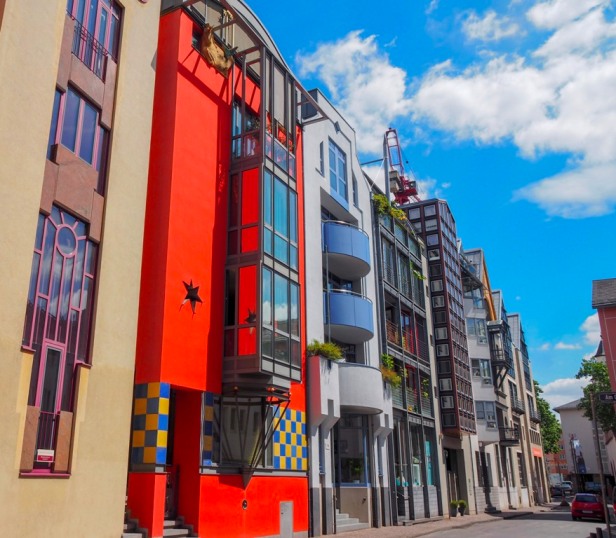 Boasting an 1980s architectural style, albeit still part of the historic town refurbishment are the quite unique Saalgasse townhouses located directly next to the Schirn. 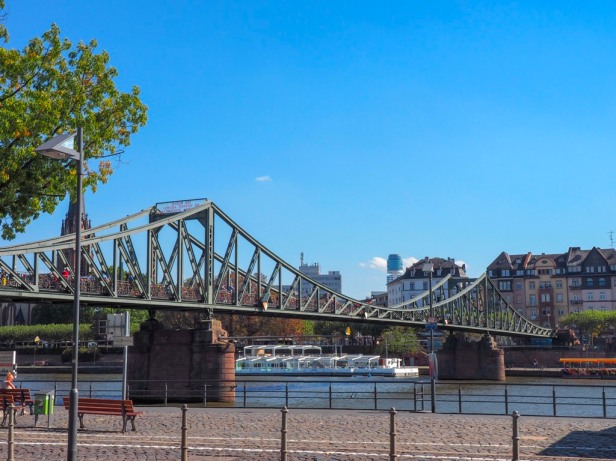 Just a few steps away from the historic town centre you will find the city’s perhaps most famous bridge spanning the Main River, the so called Eiserner Steg, the Iron Footbridge. Originally built in the late 1860s, the bridge was later replaced by a slightly larger version in the early 1910s and again in 1946 after it was destroyed at the end of the war. 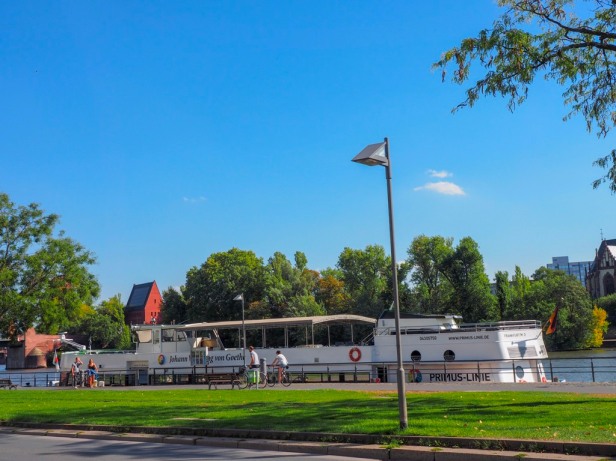 Directly adjacent to the bridge, you will find the cruise line terminal from where tours down the river will depart.

Since Frankfurt is one of the main airport hubs in Europe with good public transport into the city centre from the airport, if you have a few hours to spend during a layover, the renovated historic town centre could be a perfect destination to be explore.

Have you been to Frankfurt yet? Let me know about your experiences.

"The little wine villages across Franconia wine region are straight out of a fairytale. Don't you agree?
The most beautiful wine village in Franconia? All of them are so amazing, it's hard to tell. But Sommerhausen was definitely a favourite. One of the smallest in the region, it has so many stunning corners, like this litte gem.
There is truly no shortage of stunning fairytale-like sights in the German countryside.
Franconia might be Germany’s third largest wine growing region, looking back at more than one thousand years of winemaking. Yet it is perhaps one of the most overlooked internationally.
This is one of my favourite fall pasta recipes. Fast, healthy, and delicious these creamy mushroom tagliatelle are on the plate in less than 30 minutes.
With more than 20,000 castles in Germany, there is plenty to chose from. Definitely was in love with the stunning Marienberg Fortress towering over the city of Würzburg, especially its many hidden corners.
Loading Comments...
%d bloggers like this: