Charming colourful renaissance buildings along with a large number of parish churches, abbeys, monasteries and chapels make Erfurt one of Germany’s most attractive cities to visit. Having been the home of many famous artists and writers, it  is also one of several towns in Thuringia looking back to a rich cultural history.

Honestly, I can’t tell you why it took me so long to visit this delightful small city. Erfurt is a treasure trove when it comes to beautiful historic architecture, culture and art.

Looking back at more than 1,200 years of history, the capital city of Thuringia in the eastern part of Germany is the perfect place to be explored in a day and thanks to its compact old core, it is perfectly walkable.

Packed with carefully restored colourful renaissance buildings, the historic core would not even need to have any other attractions to absolutely delight!

Yet there are definitely a couple of highlights that deserve a special attention.

So here are the top things you need to do and see on your Erfurt city break. 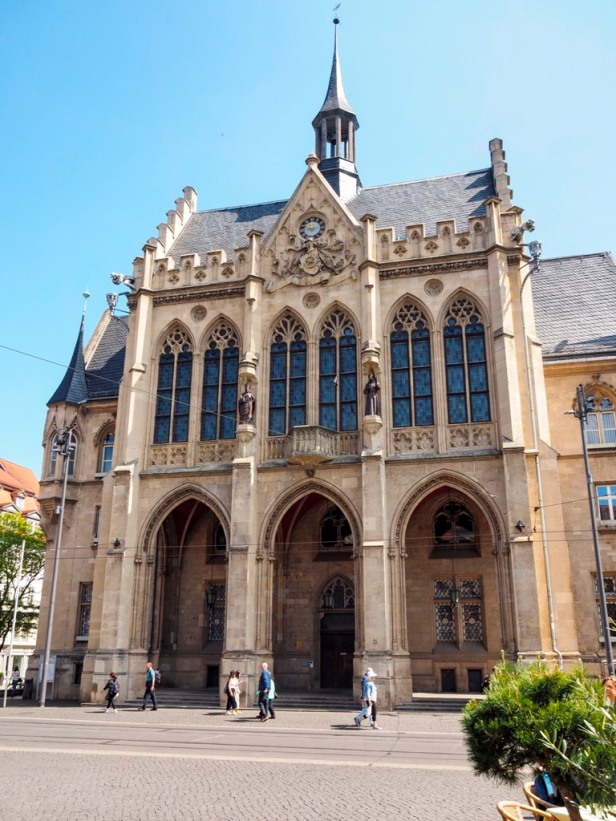 It was here where the city’s first Town Hall was built in the late 13th century. Sitting on its original site, today you will instead find a neo-gothic building dating back to 1874. The building is decorated with large murals showing local traditions and important characters on its interior walls.

Nestled around the square are some of the town’s most beautiful renaissance houses. Several of them were given their own names – which seems to be something we Germans like to do.

Built in 1584, Haus zum Breiten Herd (literally meaning ‘house of the wide stove) is certainly one of the most striking. It was once even visited by Napoleon Bonaparte.

Similarly beautiful is Haus zum roten Ochsen (house of the red ochs) – which is in fact painted a bright yellow! It was built during the 16th century and replaces a building that was already mentioned at the end of the 14th century. 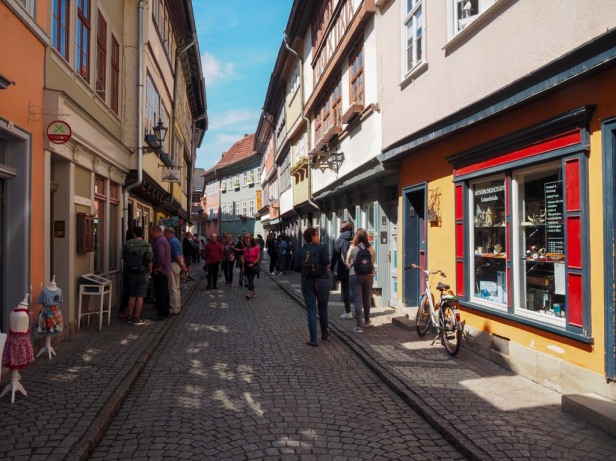 Even if you are unfamiliar with Erfurt, you have likely seen pictures of one of its most famous locations: Krämerbrücke (Merchants Bridge), which was first mentioned in 1117 is Germany’s only bridge that is  inhabited; and measuring a total of 120 metres, it  is actually the longest inhabited bridge in Europe.

Krämerbrücke is home to many small shops and cafes; and whilst many are gift shops I was pleasantly surprised most actually sell nice artisanal products rather than the cheap tourist stuff you might expect to see at a place attracting large numbers of tourists each year. 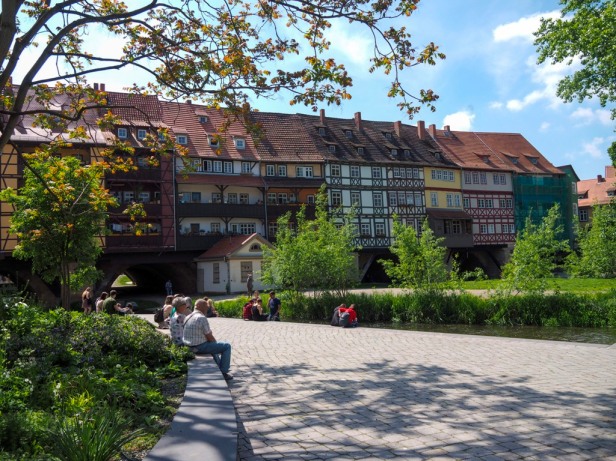 Lined by houses on both sides, you actually won’t get the feeling to be walking on a bridge. To get the real feeling of the place, step through the small alley nearly at the eastern end of Krämerbrücke. It will lead you down to the river Gera from where you will get a wonderful perspective of the bridge build of lime and sandstones and its beautiful medieval houses.

You can also pass directly under the bridge and whilst the view from the other side is a bit less spectacular as you are missing the water there, is still offers stunning views of the beautiful houses.

One of the most famous shops on the bridge is an ice shop called ‘Eiskrämer’ – in Germany in the past the word Krämer was used to refer to a person selling goods. The shop sells a large range of artisanal ice creams, including quite unusual flavours such as goat cheese with green pepper.

At both ends of the bridge, you will find two cute squares offering the opportunity to sit down and have a coffee or lunch.

Wenigemarkt, the larger of the two squares at the eastern end of Krämerbrücke is home to Ägidienkirche. The church forms the eastern entrance to the merchants bridge through a small archway. It is one of the formerly tow bridgehead churches; the second one at the western end of the bridge was demolished at the end of the 19th century. 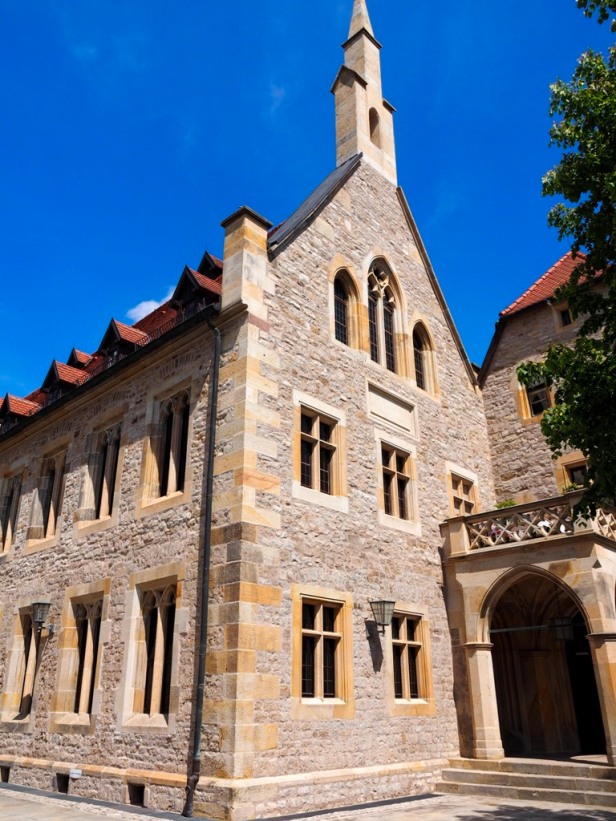 From Wenigemarkt, you are not far from the 13th century Augustinian monastery where reformer Martin Luther became a monk in 1505, living at the monastery for another six years to 1511. It is one of the stops on the German Martin Luther trail which is deemed to be one of the most magnificent scenic routes in Germany.

Located right next to each other, St Mary’s Cathedral and the Church of St. Severus form a striking ensemble of gothic design.

The three-towered Cathedral dates back to the 13th and 14th century. It is home to the world’s largest free-swinging Medieval bell – the famous Maria Gloriosa, which was cast in 1497 and weighs a massive 11.45 tons!

St. Severus Church, also called Severi church, was first mentioned in 1121. It is home to the tomb of St. Severus and boasts a striking five-aisled hall.

The huge cathedral square (Domplatz) in front of the cathedral hosts a daily farmers market in the morning (except on Sunday). It is not completely clear but it is believed a market was already hold at this place as early as the 8th or 9th century.

On the other side the large square is lined by Erfurt’s old colourful renaissance houses. Many of them are named  and along the square two of the most prestigious are Grüne Aphoteke (green pharmacy) dating back to the 18th century and Zur Hohen Lilie (To the high Lily). 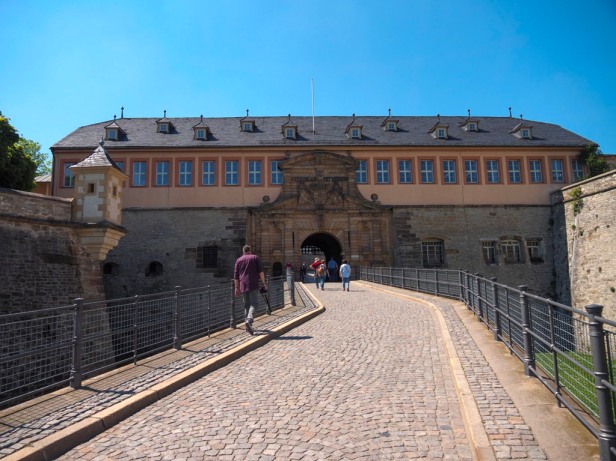 Erfurt also has its own fortress, located on the approximately 230 metres high Petersberg (St. Peter’s Hill). Built between 1665 and 1707 it is deemed to be the largest and best preserved Baroque city fortress in Central Europe.

Below the fortress is a huge labyrinth of underground tunnels which you can visit. You will need some time however, as the only way to access the tunnels is a guided tour which takes two hours.

On the way up to the fortress, you will also find a small vineyard, which refers to the regions century’s old history of wine growing. 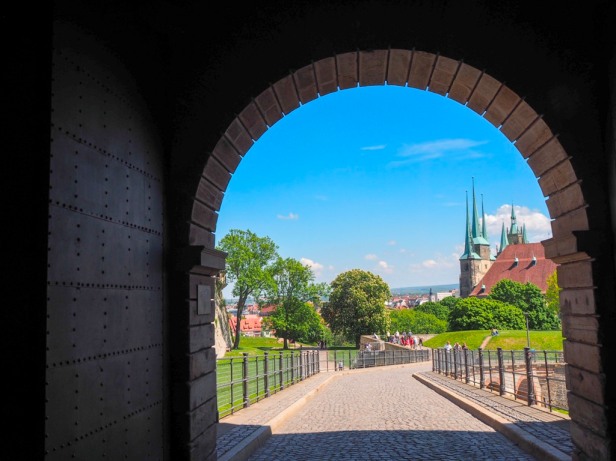 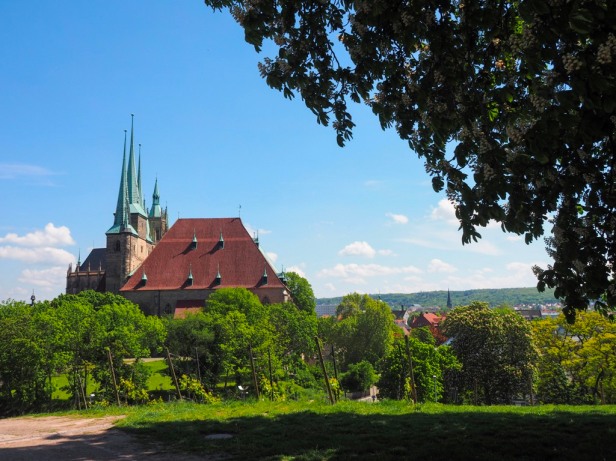 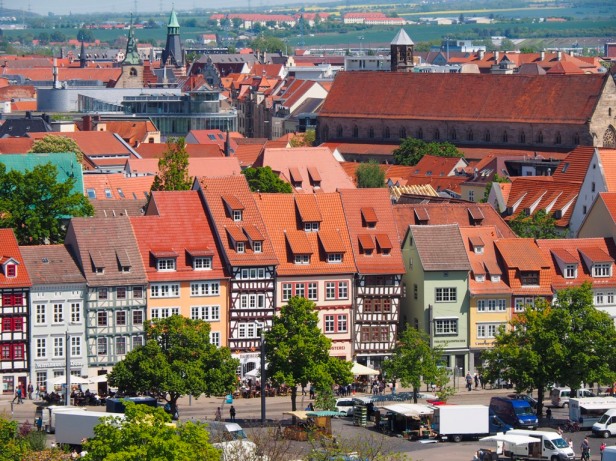 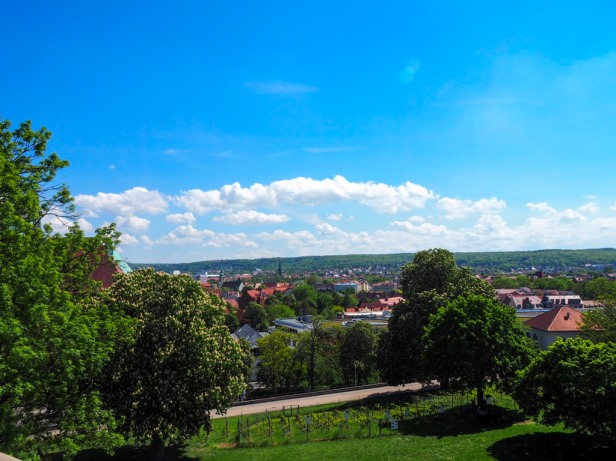 From the top, you have the most amazing views over the city, with nearby St. Mary’s Cathedral and Severi church along with the many colourful houses within the historic core.

Another place steeped in history is the city’s old synagogue. It is one of the best preserved synagogues in Europe, and large parts of the building actually dating back to the 11th century it is also one of the oldest still standing. Today, it is a museum for Jewish history and you will also find the ‘Erfurt Treasure’ several thousands of medieval coins and other jewelry.

And finally, not a place to visit, but there is the really unique story of the Erfurter Puffbohne (referring to a type of bean known as broad bean).

This specific type of bean is mostly grown in the Mediterranean. However, the nutrient-rich soil and mild local climate in the Erfurt region offers optimal conditions to cultivate this bean here as well.

The local population has been always very fond of this vegetable and the story goes that they always carried some of the beans with them when going out, and when passing a field where the beans were grown, the actually greeted the beans to express their appreciation. This earned them the nickname ‘Erfurter Puffbohne’.

The locals actually like this name so much that today every person that is born in Erfurt is given a pink or blue toy figure of a puff bean. All other people, whether they live in Erfurt or only visit but have not been born there can only buy the same toy in a green colour.

Have you been to Erfurt yet? Which part of the old town did you like most? Let me know about your experiences.

2 thoughts on “8 highlights that will make you love Erfurt”