Have you ever heard of or travelled Germany’s Romantic Road?

Stretching from Würzburg in the north to Füssen in the south over approximately 400 kilometres this scenic route is perfect to explore the breathtaking German landscape, stopping of at picture-perfect ancient villages.

With the northern part of the Romantic Road an easy trip from my home town, I decided to take advantage of a long weekend to revisit the lovely Tauber Valley and finally tick off two hotels that had been on my list for quite a while.

After a day exploring romantic Rothenburg ob der Tauber and spending the night right there in the historic Hotel Eisenhut, it was on to the small historic town of Weikersheim and Hotel Laurentius.

You might have heard of some of the destinations along the Romantic Road like Würzburg, Rothenburg ob der Tauber, Dinkelsbühl, Augsburg and the world famous Neuschwanstein Castle.

Well, you are forgiven if you haven’t. Although the town is part of the official Romantic Road itinerary map, the majority of those road tripping along the Romantic Road will likely not have it on their list of must-do stops.

Yet despite being one of the smaller and less known locations, the little town is home to one of the most important renaissance castles in Germany.

Schloss Weikersheim dates back to the 16th century. It was built by orders of Count Wolfgang of Hohenlohe who took up residence in a than existing older castle but wanted a new, more impressive building.

The knight’s hall is known as one of the best-preserved halls dating back to this era, featuring a rich decoration and a beautiful panelled ceiling with colourful hunting scenes. 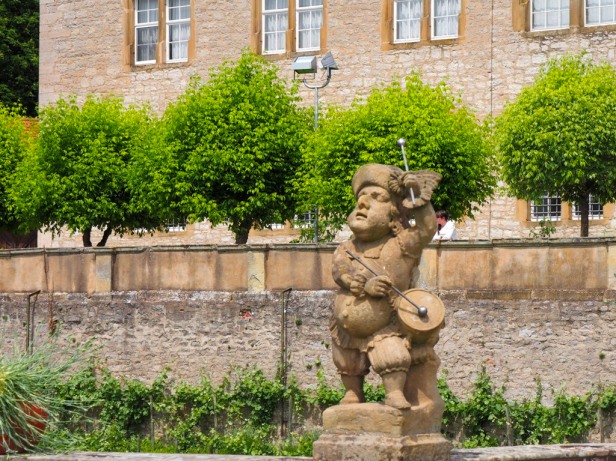 The stunning garden was created during the late 17th century by another member of the Hohenlohe family, Count Carl Ludwig of Hohenlohe. He ordered it to mirror the baroque style of Versailles in Paris and is responsible for another distinctive feature: Among the many baroque statues that you can find across the garden are the famous Weikersheim dwarfs – which represent the members of his court! How funny is that?

There is an admission fee if you want to tour the castle grounds. If you want to see the interior, which is still largely the original, you need to join a guided tour. 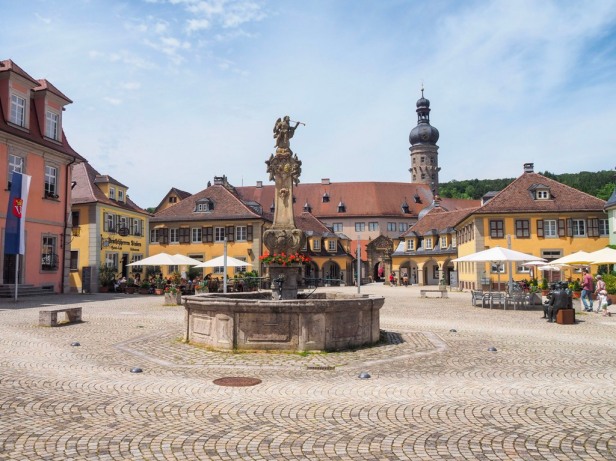 Just steps away from the castle, you will find the lovely historic market square of Weikersheim, lined by a number of half-timbered and listed buildings dating back to various centuries.

Where to stay in Weikersheim: Hotel Laurentius

Hotel Laurentius was on my list for some time as it was touted as an excellent location for a wine and food getaway by a number of leading German gourmet magazines.

It is one of the many small, family-operated country hotels across Germany that when you arrive feels more like a typical guesthouse than a hotel.

Indeed, you will be welcomed almost like a friend and meticulously looked after by the friendly staff.

On the other hand, you have to accept as a very small operation employing only the owners and few additional staff, everybody around is responsible for everything. Maybe except for the chef. 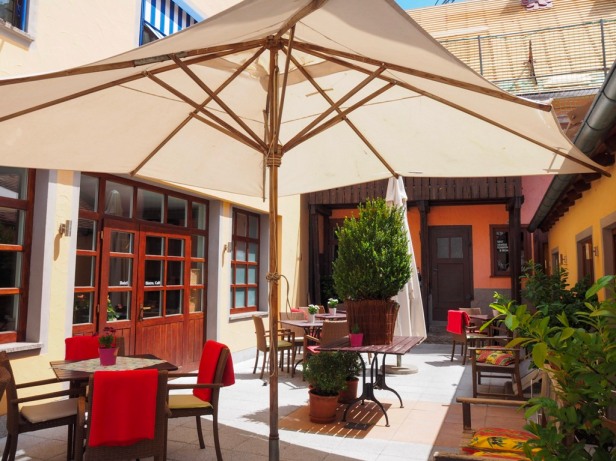 This meant, our check in was not possible before 3pm as staff was still busy dealing with restaurant guests and preparing the rooms.

No complaint, as we know we were early and had planned a visit to the nearby castle anyway. But when you travel the German countryside and look after this type of authentic accommodation, this is what you need to expect.

Hotel Laurentius is located right on the historic town square in one of the historic buildings and offers nine rooms and four suites (which by international standards you would likely call a spacious double room; but that is absolutely fine and they are drop dead gorgeous). 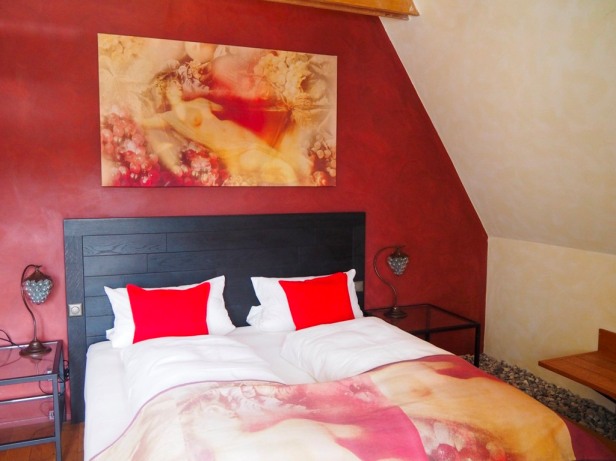 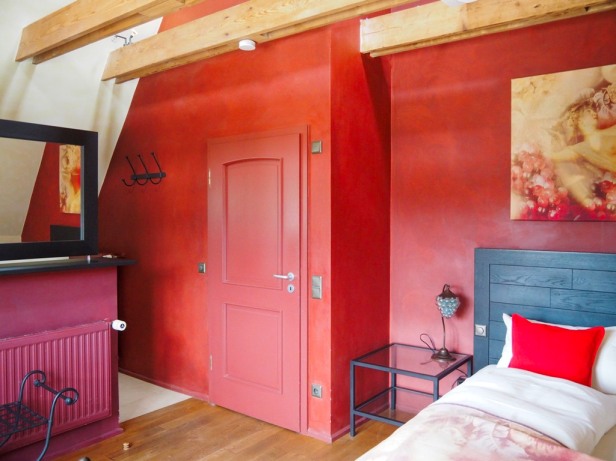 Each room and suite is styled individually based on a specific wine theme and the design of our Grand Cru Junior suite was quite superb, spotting a lovely Bordeaux-red and yellow-golden colour scheme and wooden parquet.

The room also offered a splendid view over the historic market square and the nearby castle.

The hotel (or better the hotel’s gourmet restaurant) is a member of JRE Jeunes Restaurateurs, an association which I only recently have become aware of; despite having already stayed in some of their associated hotels.

Jeunes Restaurateurs literally means ‘young chefs’ and that is what the association is actually about: It groups together restaurants led by young chefs which upon joining cannot be older than 37 years, need to have a proven track-record as independent chef and need to be included in at least three internationally recognized restaurant guides. 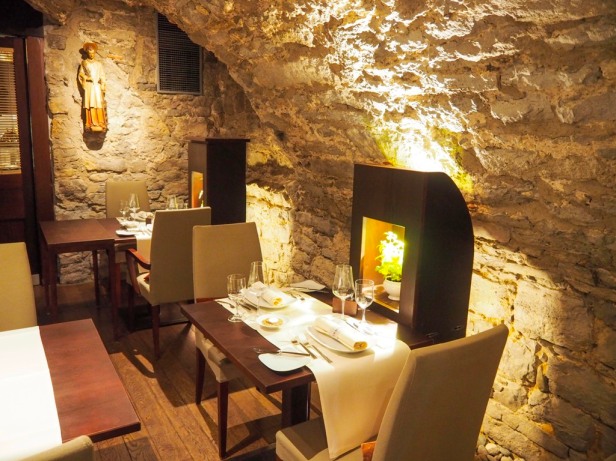 The small Michelin-star gourmet restaurant at Hotel Laurentius is located in the old stone vault and here too the design is wine themed.

The menu is largely based on regional seasonal products whilst featuring selected international produce and spices that reflect the chefs history abroad.

The only complaint I had during the evening was that three hours for a four course menu did seem a bit too much; at the end there was nearly a 45 minutes wait for our dessert to be served.

I can understand the restaurant need to work with a small team to maintain an essential margin; however not everybody will appreciate a much extended waiting time around courses. It might be worth for the restaurant to consider a simpler menu that will not require the level of preparation that needs to go into the current quite sophisticated dishes. 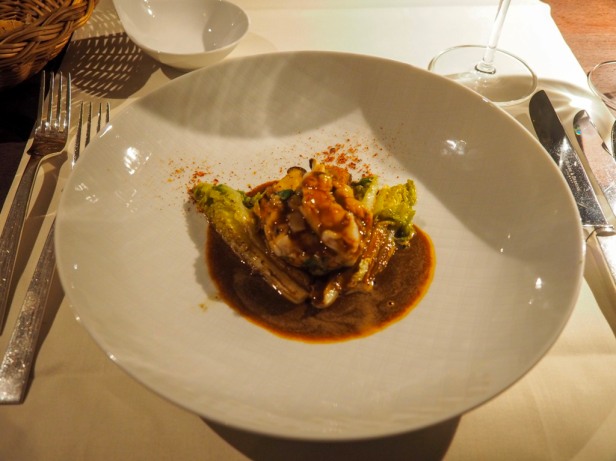 That said, everything that was served was absolutely superb.

A well sorted breakfast buffet is served in the hotels bistro in the morning, including a choice of eggs-any-style from the kitchen. 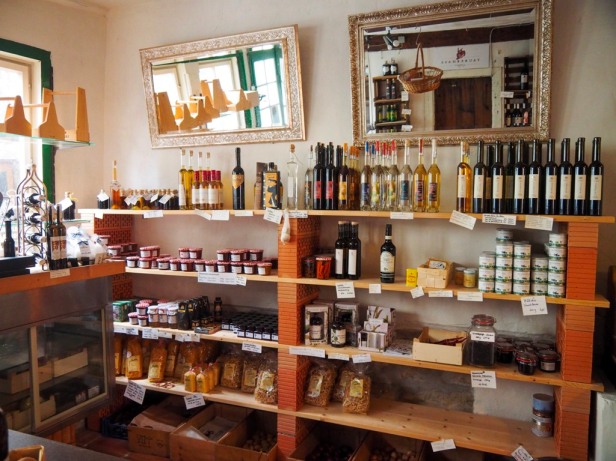 The small country shop integrated into the property sells a small selection of wine, juices, jams, pasta and fresh fruits, vegetables and meat (mainly pork) from local farmers. It was closed during our visit as it was a public holiday albeit we managed a quick look and I would have loved to have more time to stock up on a couple of items.

I had a lovely stay at Hotel Laurentius and if you are looking for a unique stop touring the beautiful Tauber Vally or along the German Romantic Road, I can only recommend to stay for a night to enjoy an authentic countryside retreat with an excellent dining experience.

5 thoughts on “Hotel Laurentius: A cute wine hotel on the German Romantic Road”

Where to stay if you love good food and want to explore an exciting wine region?
We are just past the Summer Solstice, the day with the longest hours of daylight here in the northern hemisphere.
The first wine estate in the world to make Riesling wine, Schloss Johannisberg in the Rheingau remains one of the major attractions in the area.
Don’t wait for Derby Day to enjoy a refreshing classic Mint Julep.
On April 25th Italy celebrates Liberation Day, a public holiday in the whole of Italy … but did you know it’s also the Feast of Saint Mark (Festa di San Marco) in Venice?
HAPPY EASTER!
Loading Comments...
%d bloggers like this: